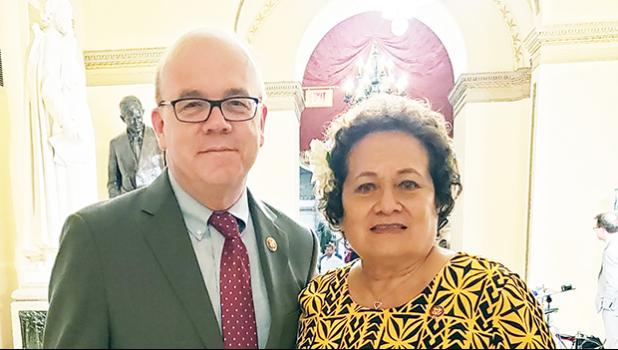 Washington, D.C. — Uifa’atali Amata spoke Tuesday before the House Committee on Rules in a roundtable on food security to explain American Samoa’s needs regarding food and nutrition. The roundtable was titled, Ending Hunger in America: Examining Hunger in U.S. Territories, and its purpose was to learn similarities and key differences surrounding hunger and poverty between the U.S. states and territories. The discussion encompassed federally funded nutrition programs, current status and challenges, and examination of root causes.

Congresswoman Amata thanked Director Muavaefaatasi John Suisala of the ASG Department of Human & Social Services, who is also providing information to assist the Committee’s assessment. She also expressed appreciation to Chairman Jim McGovern and Ranking Member Tom Cole, who were influential during the Storm Gita response in approving Amata’s amendment that provided access to up to $18 million in nutrition funds that year.

“The majority of American Samoa lives below the poverty line,” Congresswoman Amata said to the Committee. “As there is a clear connection between poverty and food insecurity, it stands to reason our population is particularly sensitive to any changes in government food subsidies like food stamps. The standards by which the rest of the country measures the need for food stamps simply cannot encapsulate the needs of our territory. While our block grant program should offer some flexibility by separating us out from federal SNAP benefits, the eligibility for food stamps doesn’t always reflect the relative needs of our population.”

Amata’s initial statement, available as video footage, noted the islands’ economic struggles and remote location, and how that can have an impact on food security.

Amata’s initial statement noted the islands’ economic struggles and remote location, and how that can have an impact on food security.

“We import almost all of our food, and any interruptions in the supply chain are a direct threat to our people’s wellbeing,” she said. “While import and quality regulations are important to keep our supply chains safe from foodborne illness and illegal activity, it is sometimes the case that bureaucratic action impedes the flow of goods, causing prices to rise. As a result, the most unfortunate of us can go hungry. Our island has been struggling to secure the services of a dedicated USDA certified meat inspector for some time now. We have been relying on off-island inspection which adds extra time to the process and is prone to delays.”

She continued, “Our local people have also expressed concerns about their ability to bring food from Western Samoa. While the two Samoas are very close and have strong ties to each other, the fact that Western Samoa is an independent country means moving goods between islands is subject to import regulations, which can add a layer of difficulty even when locals are just trying to send food to their families. An otherwise close and convenient source of food is rendered too complicated to take advantage of.”

“Regulations that don’t take into account local circumstances not only affect imports but also local food sources. For example, differing interpretations of procurement regulations has made it difficult for our local Dept. of Education to use local produce for our school lunch program. A work-around exists, but the resulting sub-contracting structure means that local farmers are losing a cut of their profits to middlemen which in turn disincentivizes them to participate. Neither the farmers nor the school children can fully benefit from such arrangements,” she stated.

In a key moment, which caught the Chairman’s interest, the Congresswoman appealed for food choices to take into account the local culture.

“Our local Territorial Administration on Aging provides a hot meals program for our elderly, however our elders have often complained to me that they are dissatisfied with the program, as the government standardized meals do not always align with a local palate,” she concluded. “They would also prefer a system that allows them to share and eat food with their families. Eating together is a very important communal experience, and while the standardized meals technically meet all their basic nutritional needs, and the TAOA officials do their best to care for our elders, many of our elderly feel the resulting structure is an overly inflexible and impersonal experience.”

In this video clip, Chairman McGovern circled back to the concern Amata raised, and asked the panel more about making food programs appealing to cultural tastes.

In a separate closing statement, with available video here, Amata stressed the need for federal nutrition to not be so one-size-fits-all that policies prevent making local adjustments that get more value for the population.

“As we’ve heard today there are some similarities between our districts, but ultimately the through-line is that there is no one-size-fits-all when it comes to addressing food insecurity. At the end of the day this is about the people and making an effort to meet them where they are at. We are all human, and we all need to eat. Thank you again to the Chairman for recognizing that fundamental fact of life and I know we can work to end hunger once and for all.”