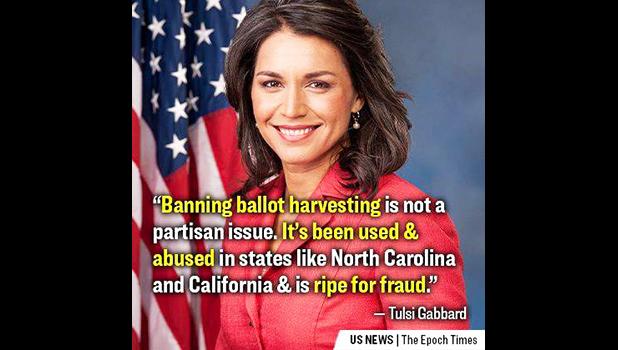 On Sept. 28, Gabbard tried to garner support on Twitter for legislation she introduced last month with Illinois Republican Rodney Davis to ban ballot harvesting, a practice that she says has the potential for widespread abuse.

To help prove her point she cited a just-released undercover video from Project Veritas, a right-wing activist group known for spreading misinformation, that purported to show that Omar’s campaign was illegally collecting ballots and filling them out to win her bid for re-election.

The story, like many narratives pushed by Project Veritas and founder James O’Keefe, appears to be false.

Stanford researchers have also said the video seems to be part of a coordinated disinformation campaign meant to distract from a New York Times story published the same day about President Donald Trump’s tax returns.

Ocasio-Cortez took to Twitter on Tuesday to demand Gabbard apologize to Omar, who is one of the first Muslim women to serve in Congress.

“You, along with everyone else who amplified this fraudulent story, owe Rep. Omar a public apology,” Ocasio-Cortez said.

Gabbard deleted her tweet referencing Project Veritas after Ocasio-Cortez called on her to apologize. The Hawaii congresswomen then tweeted out an apology to Omar and asked if she and Ocasio-Cortez would support her legislation.

“The issue is not about any of us. It’s about voter harvesting,” Gabbard said. “Ilhan, I apologize for referencing the PV story as an example without thoroughly vetting it.”

Ballot harvesting, which is legal in some states, has become politically fraught as President Donald Trump pushes his own false narratives about widespread voter fraud in the lead up to the 2020 election.

According to The Washington Post, some experts believe that “harvesting” is a loaded term and that it should be replaced with “collecting.”

Where it is legal, voters are allowed to fill out their mail-in or absentee ballot, seal it in a secure envelope and give it to someone to drop off on their behalf. Those concerned with fraud are worried that those collected ballots could then be altered or disposed of altogether.

Gabbard’s bill banning ballot harvesting only had four cosponsors as of Tuesday, all of them Republican