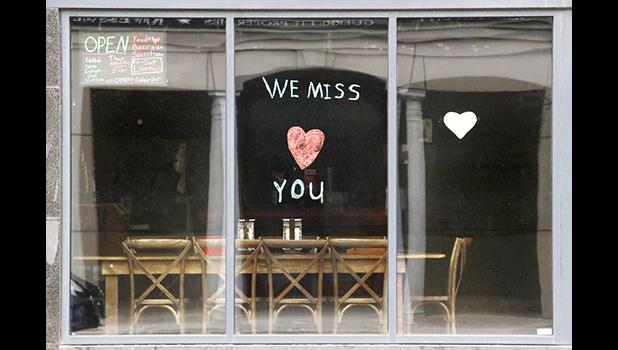 (AP) — And the American people returned to the American streets, bit by bit, place by place. And in the spaces they shared, they found a world that appeared much the same but was, in many ways, different — and changing by the day.

And the people were at turns uncertain, fearful, angry, determined. As they looked to their institutions to set the tone, they wondered: What would this new world be like?

The choppy re-engagement of Americans with public life over the past week, with more to come as cries to “reopen the country” grow, means a return to a shared realm where institutions of all types form the shape of American life.

Yet can you reopen a society — particularly a republic built on openness and public interaction — without its physical institutions at full capacity, without public spaces available for congregation?

“Humans are just terrified of other humans right now. They just don’t feel confident about each other,” says Daniel Cusick, a New York architect who has worked on public spaces for three decades. “But people need a structure. They need to be told there’s something greater.”

Enter the “institution,” a word with multiple personalities — some truly public, some partially public, some purely commercial. All figure in this mid-virus re-engagement. All are part of the web of public trust, and all have a tone to set.

It can also mean skyscraper lobbies, shopping malls, hotels, big-box stores and supermarkets — the touch points of a consumer society whose open, public operation means a society is edging toward normal.

Eric Martin, a Bucknell University associate professor of management who studies disaster responses, cites an established place like Katz’s, the crowded New York deli made famous in “When Harry Met Sally.” How business like that act, he says, will speak volumes.

“It doesn’t change quickly. It’s been around forever. That’s what it means to be an institution. And so we allow these places a legitimacy that we might not with other places,” Martin says.

“We think those are legitimate organizations. So if they’re doing it, if they’re changing, we say, ‘Oh, this is real,’” he says.

Something else unites these places. In each, the woman on the next bench, the man ahead in the checkout line, the family down the pew are suddenly potential vectors — or potential victims. So we’re assessing the public realm in the way we assess a salad bar when we walk into a restaurant.

That can impede a free society’s functions in ways not yet fathomed.

“Democracy depends to a surprising extent on the availability of physical, public space, even in our allegedly digital world,” John R. Parkinson writes in “Democracy and Public Space: The Physical Sites of Democratic Performance.”

The digital world has kept many institutions going in the United States since mid-March. It has allowed an approximation of office life to continue. It has, along with a robust supply chain, brought to our doors some of the goods we usually go and get.

But those same functions, paired with unease, could work against the return to public spaces.

“Technology is reshaping what it means to be in a public place,” says John R. Stilgoe, a historian and landscape expert at Harvard who has spent his career exploring and chronicling the landscapes where Americans move around.

“How do you define the ‘public realm’ when an enormous percentage of the American public spends the majority of its day in its pajamas?” Stilgoe says.

Already, there are hints of what institutions and the spaces they occupy could look like. If even some come to pass, they could alter Americans’ relationship with the public realm.

— Vibrating pagers like those used at chains like Red Lobster. Already some hospitals are handing them out; instead of entering a lobby, wait in the car until you buzz.

— Arrows on the ground, and other physical markers to encourage and enforce distance. Imagine sidewalks with scoring every 6 feet (2 meters) so those walking could make sure they’re the human equivalent of a few car lengths behind. Or large sculptures deployed to separate people.

— New designs for eating places. McDonald’s is already prototyping a socially distanced version of its restaurant that could be a template for fast-food spaces around the world.

— Checkerboard grids on the grass in parks, with people allowed to occupy one square only if those surrounding it are empty. Or time-sharing of public places: If you don’t show up for your 12:15 p.m. slot at the playground, you’re out of luck.

A bit dystopian? Maybe. But there are warmer alternatives, too.

Nan Ellin, dean of the college of architecture and planning at the University of Colorado Denver, is working with her students and the city to close some restaurant-heavy blocks to traffic so the street can be used as outdoor cafes and “the tables can be farther apart from one another.”

“We don’t want to lose our public ground. But we want to have a safe public ground,” says Ellin, editor of “Architecture of Fear” and author of “Good Urbanism: Six Steps to Creating Prosperous Places.” She adds: “We need little hooks to get there so people can start to be with one another again in a way that feels safe.”

Architecture has always dictated behavior. In China, where controlling people is a government priority, Beijing’s avenues are lined with metal fences just high enough to keep people on sidewalks. The sprawling, segmented layout of Pakistan’s capital city was designed in part to discourage mass gatherings.

But those are public spaces responding to visible threats. Retooling spaces to an invisible virus — the crux of what American institutions face today — is different.

Will we wear masks in banks, where a masked man means something different? Will the DMV, the butt of a thousand long-line jokes, suddenly lack lines? Will we retreat to our cars, bypassing public space entirely in what Cusick calls “people moving from bubble to bubble, like the Jetsons ”?

In 1943, after a German bombing of the British Parliament, Winston Churchill advocated rebuilding the House of Commons chamber exactly as it had been. He invoked the importance of the physical institution in preserving national ideals. “We shape our buildings,” he said, “and afterwards our buildings shape us.”

As isolation ebbs, a similar question confronts Americans repopulating the public places they share. How will these places reshape society — and how will trepidations about a post-isolation world shape them in turn? We can only go so far.

“You cannot hold the air to yourself. The air is shared,” says Marci J. Swede, dean of the school of education and health sciences at North Central College in Illinois.

“‘No man is an island’ has no more truth than when we’re talking about the air we’re breathing,” she says. “And it’s hard to be around other people when you don’t have that sense of trust.”

Ted Anthony, director of digital innovation for The Associated Press, has been writing about American culture since 1990.