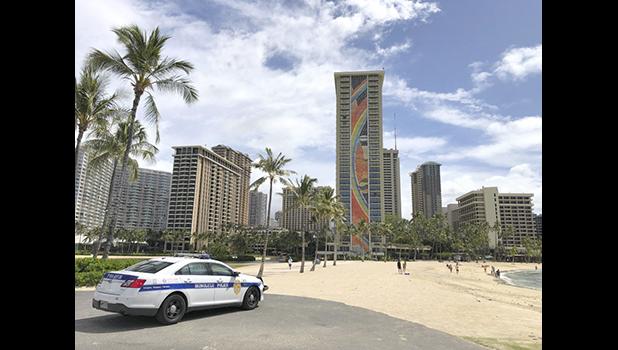 HONOLULU (AP) — Hawaii authorities are cracking down on rogue tourists who are visiting beaches, riding personal watercraft, shopping and generally flouting strict requirements that they quarantine for 14 days after arriving.

A newlywed California couple left their Waikiki hotel room repeatedly, despite being warned by hotel staff, and were arrested. Others have been arrested at a hotel pool, loading groceries into a vehicle outside a Costco and bringing take-out food back to a hotel room.

The rules, the strictest in any U.S. state, have helped keep infections relatively low. As of Wednesday, Hawaii reported 626 coronavirus cases and 17 deaths.

Yet the shutdown has devastated the islands’ economy, which is hugely dependent on tourism. Since March 26, when Hawaii put the rules in place, about 5,000 visitors have arrived, compared to pre-pandemic times when about 30,000 came daily.

That’s left the state reeling — unemployment is estimated to be in the range of 25% to 35%. Tourism industry officials say the hotel occupancy rate was down about 34% compared to March last year. More than 100 hotels have suspended operations and workers laid off from their jobs wait in long lines at food distribution sites.

It makes those who ignore the rules especially offensive, said Honolulu City Councilmember Kym Pine, who wants travelers tracked via their cellphones or tested for the virus before boarding planes for Hawaii.

While in quarantine in a hotel room or residence, people aren’t allowed to leave for anything other than medical emergencies. That means no grocery shopping, no strolls on the beach, no hotel housekeeping services.

When the honeymooning couple, Borice Lepovskiy, 20, and Yuliia Andreichenko, 26, of Citrus Heights, California, arrived at their hotel last week, a front desk manager read them the quarantine order, but they claimed airport staff told them it would be OK to visit friends and go to beaches. They left the hotel.

According to the state, they returned after midnight with a pizza, checked in and refused to sign a quarantine agreement.

In the morning, they left their room and were arrested when they returned.

They’re among at least 20 people arrested statewide on charges of violating the quarantine, and many others have received warnings or citations. Anyone convicted of violating the emergency rule faces a fine of up to $5,000, a year in jail, or both. Officials have even considered having travelers wear an ankle bracelet during their quarantine period, or setting up a designated site where tourists would be required to stay at for the 14 days.

When travelers arrive, officials verify their accommodation arrangements by contacting hotels directly and giving them a heads up that a visitor has arrived, the state said. Call center workers from the Hawaii Visitors and Convention Bureau and the Hawaii Tourism Authority follow-up numerous time to verify travelers are in quarantine. When call center workers can’t contact someone, they alert law enforcement.

Last month, a pair arrived on Kauai and were told to go directly to their hotel. Kauai police stopped them after they were seen going in the opposite direction of their hotel.

Adam Schwarze, 36, who police said lives on Oahu and his travel companion, Desiree Marvin, 31, of Alexandria, Virginia, were ultimately arrested in the parking lot of a grocery store.

Leif Anthony Johansen, 60, of Truckee, California, was supposed to be in quarantine but was spotted on a personal watercraft off Oahu’s famed North Shore. He was later followed to a Costco, where agents from the state attorney general’s office arrested him as he was loading groceries into his vehicle.

Johansen, Lepovskiy and Andreichenko could not immediately be reached for comment. Schwarze and Marvin declined to comment.

“I am, quite frankly, quite surprised that people would still want to come because this is not the Hawaii that you’ve dreamed about, that you want to experience,” said Mufi Hannemann, president and CEO the Hawaii Lodging and Tourism Association. “There’s a lot of attractions that are closed. Everyone is walking around with masks. You know, we’re just not going to demonstrate that spirit of aloha that you’ve heard so much about. ... So to me, it’s just crazy for someone to still want to come here.”