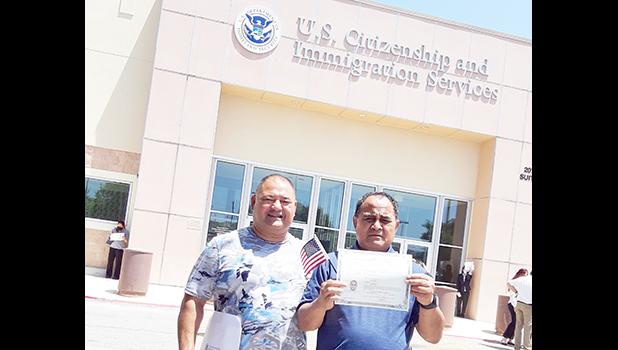 San Antonio, TEXAS — American Samoa national, Mr. Taetuli Sani was sworn in as an U.S.  citizen with many other immigrants in the Alamo city of San Antonio, Texas. Mr. Sani was the only US National with a US passport among all the others who were all green card holders.

He is the oldest brother of retired Army Sergeant First Class Vaitogi Sani Taetuli both products of the late Reverend Sani Va'alele Taetuli, a native of the beautiful village of Vaitogi. It was his younger brother, Vaitogi Sani Taetuli, who initiated the application for Mr. Sani's US Citizenship.

After the US Army veteran conducted his research on the US immigration laws, he found out that any American Samoa citizen/ US National who migrates to the United States of America and decides to apply for US naturalization and citizenship, their time living in American Samoa counts. This is valuable information for any future American Samoan citizens to know that you don't have to live in any US state for 5 years to be eligible to apply.

Mr. Sani applied for US Citizenship because for most of the federal jobs that he wanted he had to be a US citizen. He resigned from his local job at LBJ Medical Center in Faga'alu as a custodian after he lost his beloved wife Vulu in November of 2017. She left him with two sons and a daughter.

Sani traveled to Texas to visit families in El Paso, Texas with his three children right before the start of the COVID-19 lockdown. Thereafter, everything changed due to the deadly global pandemic.

He is currently staying with his two sons at his brother's house at Leander, Texas until he get started with his new job and get his own place that he can call it home.

Mr. Sani was born in the Republic of Kiribati when his parents were residing back in the 1960s. At the age of 4, after his parents got divorced, his father brought him to Kioa Island, Fiji where he was raised by his grandmother and her husband. When Mr. Sani was 14 years old his dad brought him to American Samoa. Sani graduated from Samoana High School on June 3, 1985.