A Thanksgiving treat in support of raising awareness of Alzheimer’s 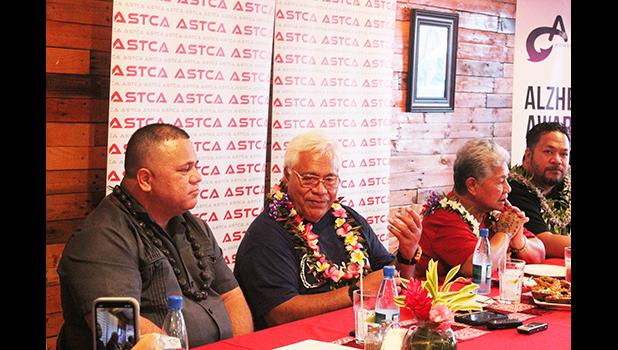 Pago Pago, AMERICAN SAMOA — The legendary Punialavaa Band led by Reverend Iosefa Lale Peteru is in the territory for a concert that will put awareness on Alzheimer’s disease. The event is a collaborative effort of the Agency for Better Living Endeavors (ABLE) and the American Samoa TeleCommunications Authority.

The Punialava’a band made up of the Peteru family — while born in Samoa, they now reside in New Zealand.

On Monday, ABLE and ASTCA hosted a “meet and greet” with the Punialava’a Band and the local media, at Cecilia’s Restaurant in Tafuna.

A representative of ABLE, Eleanor Lutu McMoore spoke at the event about her father, Afoafouvale Leulumoegafou Suʻesuʻe Lutu who was diagnosed with the disease a few years back.

“Alzheimer’s is an irreversible, progressive brain disorder that slowly destroys memory and thinking skills and, eventually, the ability to carry out the simplest tasks,” she said while fighting back tears.

She pointed out there is no cure for Alzheimer’s disease.

“When ABLE started this awareness campaign in 2019, we were so blessed to collaborate with a variety of local organizations such as TAOA, LBJ, DHSS, DOH, and the American Samoa Cancer Coalition, to name a few.

Adding that there is a strong collaboration between the government and non-profit organizations to eliminate the “negative stigma” that comes with Alzheimer and dementia. Mrs McMoore also pointed to the government efforts in raising awareness on Alzheimer’s disease.

Furthermore, ASG recognizes that the responsibilities, duties and sacrifices made by those caring for individuals with Alzheimer’s disease and other forms of dementia take an enormous toll on family members who often suffer more stress, depress, and health problems than caregivers of those with other illnesses.

According to McMoore while emphasis is being placed on Alzheimer awareness — there is still a long way to go.

She also cited the need to be proactive in issues relating to Alzheimer’s. “As we go through this Thanksgiving week, we have so much to be thankful for and we continue to be hopeful and prayerful for our loved ones with Alzheimer and other dementia related issues.

“I’m thankful for the opportunity to come together as a community as a family, to work together to understand and be compassionate, be supportive of those with Alzheimer and dementia.”

She said this year, ABLE and ASTCA worked together to bring to American Samoa the Punialava’a.

ASTCA Chief Executive Officer, Chuck Leota said its not often ASTCA partners up with a non-profit organizations for a “good cause but in support of ABLE’s efforts to create awareness on Alzheimer's disease” this was the case.

“In the last few years we have been faced with the reality of COVID we experienced a shift in our daily lives and as a result we are still trying to return things back to normal and this is just the start.”

The CEO says on behalf of the government and ASTCA’s board of directors, they are “extremely proud” to be supporting this worthy cause and welcomed the Punilava’a band to American Samoa.

She said Punialavaa band was established by Reverend Iosefa Lale Peteru and his friends from the village of Vailele but it is now being carried on by their family.

ASTCA's support has made it possible for Punialavaa to be in American Samoa during the week of Thanksgiving  for a corporate event on November 23 and a free benefit concert for families on November 25 at Utulei Beach.

In September the Punialava’a Band launched their new album — “Tagi Le Atunu’u Pele” during a live concert in Apia.

Talamua reported that this was confirmed by Lale’s wife, Vini Peteru from Auckland during a zoom conference with the media that announced the groups’ performance in a corporate concert in collaboration with the Lava Hotel and Samoa Tourism.

The original Punialava’a was founded in 1968 with Lale as their leader and songwriter and is now a family-based group headed by Reverend Lale and wife Vini and their children.