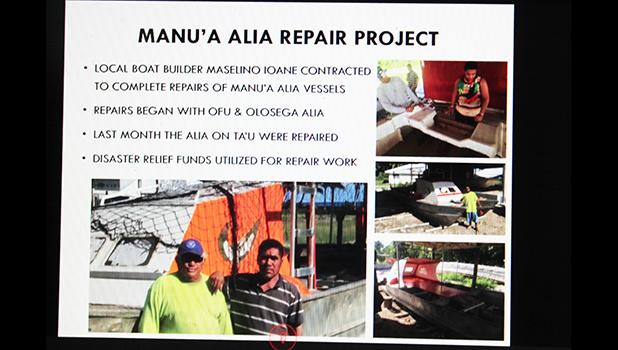 One of DMWR’s projects is the repairs of ‘alia in the Manu’a island group.

The three-day meeting, which was streamed live from Honolulu, ended yesterday.

During the presentation, Va’amua explained that repairs to 6 ‘alia fishing boats for Ofu and Olosega islands have been completed, and just two weeks ago, repairs were completed for 7 ‘alia on Ta’u island.

“Now they have a lot of boats, and they’re now asking us to push for a fishing tournament for the Manu’a islands,” said Va’amua, who noted that the request was presented to Lt. Gov. Lemanu Peleti Mauga, who is also acting governor.

He recalled Lemanu’s response; “Let’s make that the main event” for the Manu’a Cession Day — referred to as Manu’a Flag Day — on July 16th.

A fishing tournament is now planned as the main activity for the celebration in Manu’a, he said.

Photo embedded in the presentation includes boat builder, Leotiti Maselino Ioane, whom Va’amua contracted for the ‘alia repairs and was brought in from Samoa.

Leotiti “is a very good boat builder and a welder,” according to the director.

Another issue mentioned during the meeting is the “super ‘alia” or “‘alia tele project”.

The Council’s American Samoa Island Coordinator, Nate Ilaoa, briefly noted the “super ‘alia” project and said that during a Senate hearing, there were concerns by senators over the cost of a one boat — estimated to cost between $300,000 and $400,000 to build. (See Samoa News Mar. 29, 2019 edition for details of the Senate hearing.)

The Council prepared a separate summary on the super ‘alia project, overseen by the ASG Commerce Department. The new ‘alia project was part of a larger fisheries development program that the Council initiated.