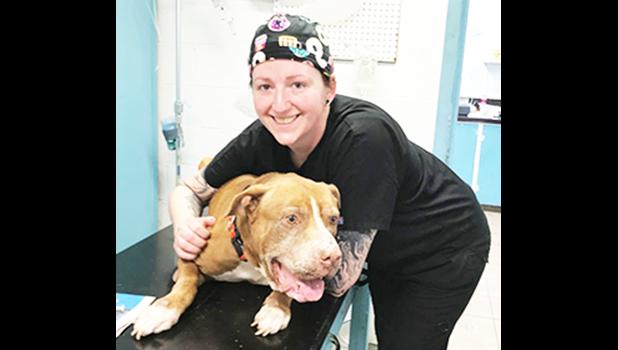 Pago Pago, AMERICAN SAMOA — “Your veterinary clinic is in crisis,” wrote Dr. Kathleen Riley, in a Sept. 2nd email to Gov. Lolo Matalasi Moliga, who was told that the island of Tutuila is experiencing an outbreak of leptospirosis.”

Dr. Riley — a veterinarian currently licensed in three US states, and a volunteer at the local Agriculture Department’s veterinary clinic in January 2020 through an arrangement between the non-profit organization Alofa Mo Meaola — also offered recommendations requiring immediate implementation, in addition to American Samoa hiring a US-licensed veterinarian.

In her letter, Dr. Riley informed the governor that leptospirosis is a zoonotic bacterial disease that can infect humans, dogs, cats, pigs, rats, and mice. She explained that Identifying and treating this disease in animals in close contact with humans, such as dogs, cats, and pigs, can help prevent human exposure and illness.

Additionally, leptospirosis can cause very serious kidney and liver disease in humans, even leading to death if not treated in time. It can also cause pregnant women to miscarry and lose their babies.

“However, this is far from the only problem. This crisis has only highlighted long-standing problems with the veterinary clinic,” she points out. “While the clinic has several caring and skilled staff members, it does not have a consistent and timely source for medical supplies.”

She noted that requests through the Procurement Office may take five to six months to be fulfilled, and it is extremely difficult to anticipate all needs, such as this leptospirosis outbreak and increased need for certain antibiotics, that far ahead of time.

She said the Department of Agriculture’s budget has no money for clinic supplies and the clinic has been operating for years by purchasing supplies directly out of revenue from its services and submitting receipts.

“This is not a cost-effective or professional way to manage a clinic.  Many suppliers will not ship to American Samoa, and others refuse to offer credit as previous debts have not been paid in full by the government,” she said, noting that “veterinary specific drugs such as vaccines, anti-parasitics, and pain medications can only be obtained through veterinary suppliers, and they require a US-licensed Veterinarian of Record on all accounts.”

She also said that the clinic has largely been relying on donations and visiting volunteer veterinarians to obtain these products. And the COVID-19 pandemic and delay in mail service “have made it impossible for volunteers and difficult for supplies to reach the island.”

The governor was also informed that in order to perform anesthesia and euthanasia, controlled substances are required, which requires federal Drug Enforcement Administration (DEA) registration, which also requires a US veterinary, medical, or pharmacy license.

Dr. Riley then shared her concern regarding Dr. Kenneth Lameta, who has been moved back to the clinic.

She reminded the governor that it was in October 2019, then-Attorney General Talauega Eleasalo Ale recommended that Lameta be terminated or “immediately reassign him to a position that does not involve the practice of veterinary medicine.”

Lameta was moved to another office within local DoA and continued to receive a salary.

According to Dr. Riley, American Samoa is the only US territory without a veterinarian. She points out that the US Food and Drug Administration (USDA) and US Department of Agriculture laws apply in American Samoa, and impose minimum standards for administering prescription drugs to companion and livestock animals.

“It is almost impossible to meet these requirements without a US licensed veterinarian, as American Samoa has no alternative regulations or regulatory board for the practice of veterinary medicine,” she said.

Dr. Riley offered several recommendations, which she says can be implemented immediately, in addition to moving to hire a US licensed veterinarian as soon as possible.

The first recommendation calls for veterinary clinic and its current staff to be moved to the Health Department, which Dr. Riley said would be more appropriate, as the clinic only treats companion animals, not agricultural livestock.

“There is clearly a demand for this service — the clinic sees thousands of dogs and cats each year. Their goals, such as reducing overpopulation, treating parasites such as worms, fleas and ticks, and treating infectious diseases such as leptospirosis, are all closely related to human health,” she explained.

If the DoA “chooses to maintain staff to monitor and treat food animals such as chickens and swine, they may certainly do so, but they must comply with federal laws regarding the use of prescription medication, which are quite strict for food animals,” she said.

Second recommendation is to coordinate the ordering of clinic supplies with the LBJ Pharmacy and hospital. She said this would allow ready access to goods such as gloves and bandage material, as well as products such as intravenous fluids and generic antibiotics, which are not veterinary-specific.

“This would significantly reduce the clinic’s cost for these items, as bulk purchasing by a single agency gives far cheaper prices and eliminates the frequent shipping charges currently being paid,” she said, noting that vaccines and parasite treatments will still need to be ordered through a veterinary supplier.

Another recommendation is for the governor to request assistance from the USDA’s Animal and Plant Health Inspection Service to identify the strain of leptospirosis currently infecting rodents, dogs, and pigs on the island, so that the level of risk to humans can be better understood and appropriate vaccines can be administered.

Furthermore, register with the USDA National Institute of Food and Agriculture as a Veterinary Shortage Situation. “This would allow access to grant opportunities for the clinic, as well as student loan benefits for a veterinarian who is eventually hired, which may help attract candidates,” Dr. Riley explained.

The 5th recommendation is to define a position and job description for a Public Health Veterinarian for the territory. Recruit and hire a US licensed candidate who has, or is eligible to obtain, USDA accreditation and DEA registration.

“Because I know how committed the clinic staff are to helping the people and animals of American Samoa, I am willing to volunteer my time to consult, fill out forms, seek grants, and write the job description for a veterinarian as needed,” Dr. Riley concluded.

Samoa News wasn’t able to confirm immediately whether or not the governor has responded to Dr. Riley’s letter, which was copied to Lt. Gov. Lemanu Palepoi Sialega Mauga, Health director Motusa Tuileama Nua, Congresswoman Aumua Amata, and a handful of lawmakers.

At last month’s cabinet meeting, Motusa said DoH is working with DoA to recruit a US certified veterinarian. And they will push to restart the stray dog task force to help reduce the number of stray dogs with leptospirosis, which has resurfaced.

An ASG official told Samoa News yesterday efforts to recruit a US licensed veterinarian is ongoing and that the Governor’s Office is being kept updated on the situation with leptospirosis.

DoH, through it’s updated health public service announcements since last month have included an awareness message on leptospirosis, which it says is a bacterial disease that is spread through urine of infected animals such as pigs, rats, dogs, cats, etc.

“Due to the recent raining season, DOH highly recommends the public to be cautious of contaminated water or soil. Children are at risk of Leptospirosis if they play in streams and muddy waters during and after the rain,” according to the DoH message.

All pet/ animal owners should take extra precautionary measures when handling animals during this time. DoH recommends using” gloves and closed shoes when handling or feeding animals, wash your hands thoroughly after handling pets, and make sure they are vaccinated at the veterinarian clinic to prevent the spread of Leptospirosis from animals to people.”