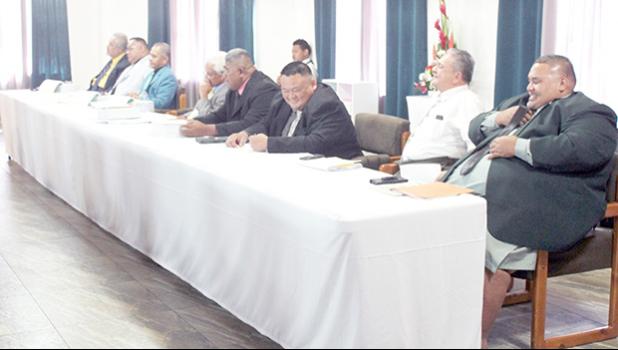 AG’s input sought but he was a no show at opening of hearings
By
Fili Sagapolutele
fili@samoanews.com

Pago Pago, AMERICAN SAMOA — The Senate Joint Budget Committee has requested financial reports for fiscal years 2019 and 2020 from the Lemanu Administration on the total surplus accumulated for each previous fiscal years, how it was spent and if it was Fono approved, as well as if the Fono ever approved a bill that allowed the spending of the surplus.

Surplus from the previous fiscal years, was one of the three main issues raised at the start of the one-hour joint budget hearings, with House Speaker Savali Talavou Ale saying that with the new Administration in office along with the FY 2022 being its first official budget submission it is important that the issue of surplus from previous fiscal years is addressed in advance.

Both Savali and Sen. Magalei Logovi’i — a former ASG Treasurer — reminded the witnesses that under local law any money received by the government during a fiscal year is submitted to the Fono for appropriation before it’s spent. And this is the same process for any surplus from a previous fiscal year.

Magalei said that the joint committee was hoping that the attorney general would show up so that this issue and other legal matters relating to the budget could be addressed.

Savali recalled that there were some projects funded with the FY 2019 surplus that was submitted by the previous Administration and action was taken by the Fono. For example, FY 2019 surplus funds were earmarked for construction of the security fence for the Territorial Correctional Facility and seawalls.

Another issue that the Fono wanted the attorney general to be questioned on deals with acting directors who are not confirmed by the Fono, but will appear before the joint committee to testify and answer questions on their respective agency’s or office’s FY 2022 budget.

Attorney General Fainu’ulelei Falefatu Ala’ilima-Utu was also to appear yesterday to testify and answer questions on the Department of Legal Affair’s budget but he had not shown up when the joint budget hearing ended an hour after it started.

No information was available at the conclusion of the hearing on when the joint committee will question the attorney general on budget issues at a later time.

Samoa News will report in future editions on other matters discussed during day-one of budget hearings, which continue today and run through Aug. 10th.