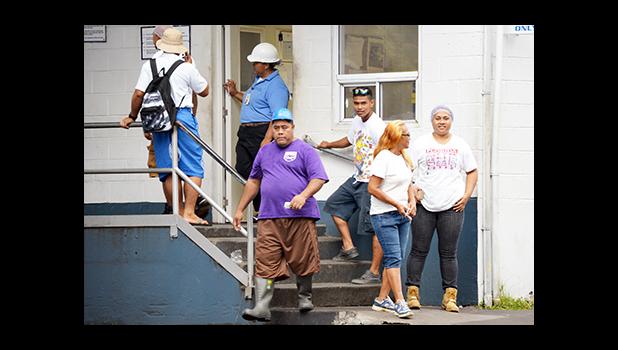 With Tri Marine International’s announcement that its Samoa Tuna Processors canning facility is indefinitely closed effective Dec. 11, there is already speculation that StarKist Co., might take over some of SPT’s property, especially the freezer storage facility, something that StarKist Samoa has been seeking to build for a long time.

The announcement by Tri Marine as well as the closure last week of production at StarKist Samoa have many in the territory worried about the fate of the canneries especially now that STP is closing indefinitely with a possible outright sale of the company, which employs about 800 workers — it’s unclear as to how many will be affected with the closure.

Asked what options the administration is working on for Tri Marine and if one of those options is securing a new company to take over STP, the governor’s executive assistant Iulogologo Joseph Pereira said yesterday, “We are awaiting detailed information from STP and Tri Marine on the number of employees affected and the options being pursued.”

In an interview early this week, Samoa News asked former Chamber of Commerce chairman, David Robinson, about STP and he responded, “I’m very disappointed that not even after two years of operation STP has decided it’s all too difficult” to continue operations in the territory.

However, “in these days there are so many opportunities for production in low cost countries, that manufacturer and processors go to these areas, where the costs are lower, where they can produce a product that is highly competitive in world markets,” he said.

Asked if he foresees changes at STP, Robinson said, “I think somebody will probably buy it. I think STP will probably sell. I’m not sure what their philosophy is about that sort of thing, but obviously they’ve decided that it’s too expensive to operate here so they might get rid of it.”

He then speculates what everyone is talking about. “The thing to watch is whether StarKist might possibly take over some of STP’s operation. StarKist has been trying to set up a freezer facility for quite sometime,” he said adding that StarKist wanted the parcel of land in the shipyard facility, which is adjacent to their production facility.

Robinson, a former shipyard board chairman, said STP has “a 5,000 ton freezer which might just suit StarKist requirements. It’s an option. But I don’t know, I’m speculating. I have no information to suggest that’s right. But it would seem to me an option for StarKist to look at that — it’s a brand new freezer facility. And the whole of STP operation is brand new and efficient.”

StarKist corporate spokesperson Michelle Faist didn’t immediately respond to Samoa News request for comments on the speculation about the STP freezer facility or taking over any other property of STP, or leasing any property including the freezer storage.

Asked if he’s surprised with the latest development with the canneries — at both StarKist and Tri Marine, Robinson said, “Not really. It’s been very difficult over the past 12 months for the canneries... to make their production quotas and to get the right level of fish they need to process because of all these other influences that they don’t have any control of.”

For example, the US president has made a lot of these fishing areas into monuments to protect fish species; and “well that’s cut back on a lot of fishing grounds that these boats from here would normally go to,” he said and pointed out that “the cost of a daily fishing license [in the region] has increased dramatically and that’s made it difficult.”

“So there have been a lot of problems in the industry, added to the difficulty of producing a product at a competitive rate. So I’m not surprised, in some respect,” Robinson said. “It’s very difficult for these organizations to survive in an environment like this, which is small and has high costs.”

Besides the closure of fishing grounds due to monuments designed by US presidents, the US purse seiner fishing fleet is currently faced with the closure of fishing in US exclusive economic zones and in high seas area, known as Effort Limited Area for Purse Seiners (ELAPS)  as fishing quotas are reached or grounds are closed permanently to commercial fishing.