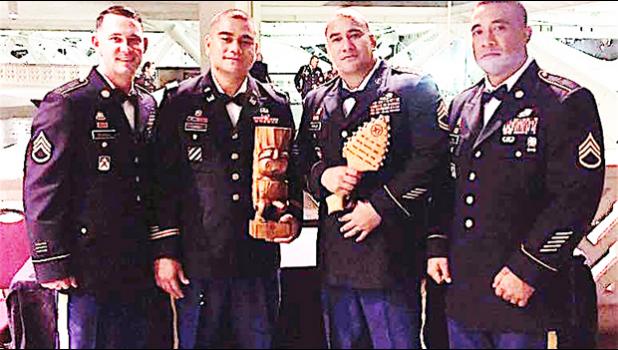 Seko, a Distribution System Operator for the Water Division of the American Samoa Power Authority (ASPA), is currently in Hilo, Hawaii for military training.

Last year, Seko was the first US Army Reservist from American Samoa to represent the 9th Mission Support Command in the United States Army Reserve Component (USARC) Best Warrior Competition, where he outperformed his counterparts and competitors from other units in the Pacific region and ultimately made him the likely choice for NCO of the Year.

The competition featured a series of tests that included a soldiers’ overall military performance and response to certain tasks under great physical and mental stress.

The Best Warrior Competition was the third one for Seko, who won both the battalion competition and the 9th Mission Support Command (brigade) competition a few months earlier.

In an initial interview, Seko described that last competition — which saw 47 US Army Reservists compete over a period of eleven days — as ‘physically challenging’.

According to the US Army website, “The Best Warrior Competition recognizes soldiers who demonstrate commitment to the Army values, embody the Warrior Ethos, and represent the Force of the Future.”

Even though Seko didn’t come home with the gold, he still represented American Samoa with pride. Seko has been a US Army Reservist for 16 years, and has been deployed twice to Iraq and Afghanistan.

He is the son of Sefo Seko and the late Fialupe Fruean Seko, and brother to Joseph and Crystal. He is married to Amy Logologo Seko (also a US Army Reservist) and they have four children: Martin, Frank Jr., Amily, and Ethan.