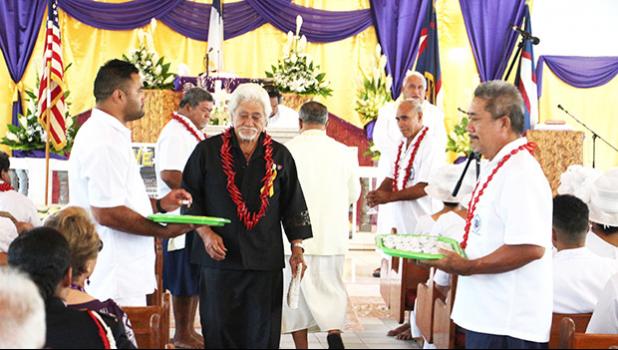 Pago Pago, AMERICAN SAMOA — The most recent developments in the Afghan Region have led to a heightened sense of readiness throughout the United States Department of Defense and American Samoa’s local U.S. Army Reserve Unit.  Currently, there are over 200 Soldiers at the Pele U.S. Army Reserve Center under the 9th Mission Support Command, headquartered in Honolulu, Hawaii.

In a press release issued Thursday, the Governor’s Office expressed their support. "We will continue to pray for those 'Toa o Samoa' who continue to serve in the region, and we will never forget the sacrifices of those who gave their lives during Operation Enduring Freedom and Operation Iraqi Freedom”  said acting governor Talauega Eleasalo Ale. “Our sons and daughters of the local U.S. Army Reserve Unit are always ready."

"I am proud to learn of all the amazing stories that our local combat veterans of all branches have shared with me. I ask for all of American Samoa to continue to pray for Toa o Samoa who are currently deployed to the Afghan region and those of the past that helped pave the way for the new soldiers," Talauega said.

Brigadier General Timothy D. Connelly in 2019, when commenting on American Samoa soldiers need to be combat-ready to be able to mobilize and deploy at a moments notice to support worldwide contingencies said, "American Samoa is a really important territory for the United States of America, particularly for the military."  The general currently serves as the Commanding General of the 9th Mission Support Command with headquarters at Fort Shafter, Hawaii. "The soldiers that are here [in American Samoa provide] an advantage to us because it gives us a population of soldiers that are forward postured in the South Pacific, closer to the South China Sea, closer to Australia, and Oceania and all of our allies in the region."

Governor Lemanu Peleti Mauga stated, "Although it has been nearly 17 years since the OIF mobilization, we still have combat veterans from that era embedded in our ranks, and they will help the younger Toa o Samoa to carry out the traditions of those who have come before them.

“American Samoa is a very patriotic country, and we hold high a regard for peace.  As an officer in the U.S. Army Reserve, I have had the pleasure of leading the best soldiers American Samoa has had to offer in theatre, and all of American Samoa's prayers and support will never be forgotten. I lift up those who are still serving in the Afghan region in prayer during such a challenging time and ask God to bring peace to their families as our brothers and sisters return safely home."

Early this morning the Governor’s Office issued this release:

The climate in the Afghan region continues to escalate with the Taliban takeover, which has caused the collapse of the Western-backed local government and security forces that have been in place for the last 20 years. Historically, the Taliban has been a militant regime that has imposed acts of violence and oppression in carrying out Islamic rule.

The U.S. Department of Defense monitors all threats to any U.S. assets in Afghanistan and are standing by to respond to any actions taken against those assets.  The American Samoa Army Reserve soldiers stand proudly, ready to defend the United States when called upon to do so.