Fish Councils look for ways to bounce back from pandemic 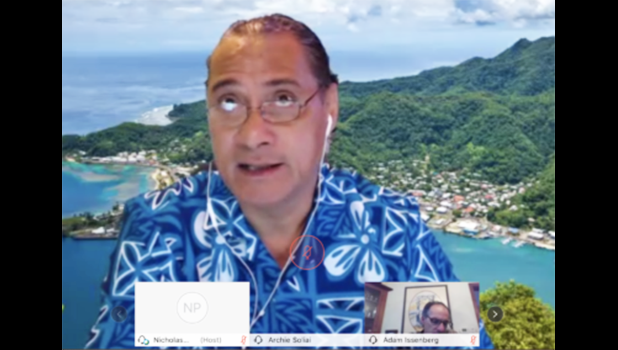 Source: Honolulu Civil Beat
Fishery managers met remotely this week to discuss the dwindling of their markets because of COVID-19.

Washington, D. C. — Archie Soliai was supposed to be leading a meeting at the Turtle Bay Resort on Oahu’s North Shore this week, but instead he appeared on a computer screen with a pixelated view of Pago Pago in American Samoa in the background.

Soliai is the chairman of the Western Pacific Regional Fishery Management Council, a quasi-governmental federal agency that oversees fish stocks in U.S. waters from Hawaii to the Pacific Island territories of American Samoa, the Northern Mariana Islands and Guam.

He works for the StarKist Samoa tuna cannery, and over the course of two days hosted a meeting of the nation’s premier fisheries managers via a WebEx video conference to discuss how commercial fishermen could rebound from the coronavirus outbreak that so far has killed more than 101,000 people in the U.S. and 358,000 worldwide.

The meeting was supposed to take place in Hawaii, where the Western Pacific Fishery Management Council is headquartered. Instead, everyone, including Soliai, top officials with the National Oceanic and Atmospheric Administration and other members of the eight U.S. fishery councils, tuned in remotely.

“The COVID-19 pandemic has made our responsibility more poignant, and highlights the often overlooked fact that managing our nation’s fisheries is about ensuring that Americans have food,” Soliai said as he opened up the forum.

“Management is very important to our fish stocks, protected species, guaranteeing our fishermen earn decent livings and recreational fishing. Those are very important for all the regions, but we must not forget that the bottom line is that our nation provides nutritious seafood to our people.”

A primary concern was how COVID-19 has decimated the fishing industry, including in Hawaii where demand for fresh seafood has dwindled to the point where a significant amount of the commercial fishing fleet is tied up at port.

The $2.2 trillion Coronavirus Aid, Relief, and Economic Security Act that Congress passed in March provided $300 million to the nation’s fishing industry, but the money has yet to be spent.

NOAA officials in charge of doling out the money told the fishery councils during the meeting that while they’ve come up with an algorithm for splitting the funds — $4.3 million is dedicated to Hawaii — spending plans still need to be developed and approved by states and territories before any money gets disbursed.

Oversight mechanisms also need to be put in place to ensure fishermen and seafood companies don’t “double-dip” in the various pots of federal relief aid, pulling in more money than they would absent a viral outbreak.

Both NOAA and fisheries officials said there’s no question the $300 million is not enough to cover the economic losses incurred by a multibillion dollar domestic seafood industry.