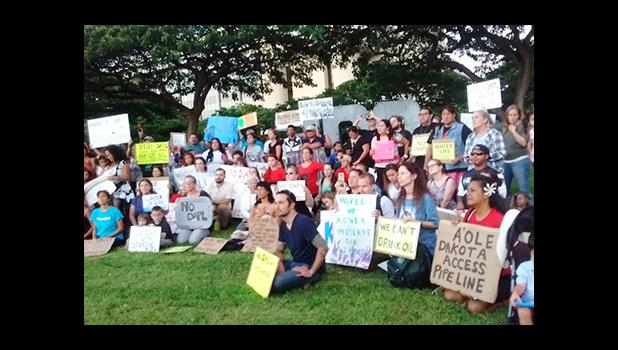 The Honolulu Aloha Aina Warriors, along with members of 350.org Hawaii, the local Sierra Club, and several other indigenous organizations, turned out in force on Wednesday, November 2 in Hawaii to protest the Dakota Access Pipeline project—now referred to as DAPL— which is underway in North and South Dakota, and being virtually ignored by America’s main stream media.

The Hawaii rally occurred in downtown Honolulu at the Federal Building on Ala Moana Blvd, where busy traffic had many supporters honking and waving in solidarity with the protestors.

The sign waving and rally was a show of solidarity — that the people of Hawaii stand with the Standing Rock Sioux, who oppose an oil pipeline being built across their sacred tribal lands.

The protest in Honolulu was also meant to highlight and make people aware of the federal government’s actions against the protestors in North Dakota, who have been pepper-sprayed and had trained dogs unleashed on their peaceful prayer meetings. Scores have been arrested, including journalists covering the events.

One organizer of the Honolulu protest wrote, “Today at the Honolulu Federal Building, we were over 200 strong! We made the 5pm & 6pm News --- breaking the local media blackout!  In doing so, we helped shine the spotlight on the insanity happening there –and showed the Protectors that we stand together with them from across the ocean.  Together we will stop these atrocities. Together we will win this battle! Mini Wiconi! Water Is Life!”

The sign-waving on November 2 was the first of several planned Hawaii vigils to raise awareness and encourage everyone to raise their voices and contact President Obama, who has the authority to stop the pipeline project, and place it under review for environmental and ecological impacts.

Their message is simple: Tell the President to use his authority and stop DAPL now!