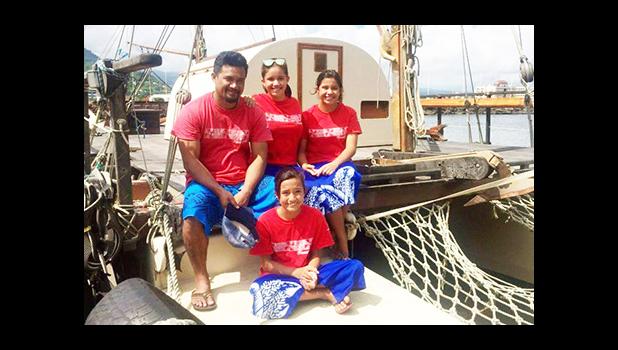 Samoan man teaches his daughters traditional Pacific voyaging skills
By
Iona Salter in Samoa, Australia Broadcasting Co.
"That's what I mean, our people have moved and become so comfortable with the land that they've stayed away from the sea … most Samoans don't really know how to swim."

An ocean-crossing, island-saving teenager is the Disney heroine kids are likely to be playing these school holidays, but for three Samoan sisters the fantasy is not so far from reality.

Nafanua, Leilani and Emma are 14, 12 and 10-years-old respectively, and their dad Xavier Lui is teaching them the traditional skills of Pacific sea voyaging.

Emma says she likes seeing turtles, riding the bow of the va'a ("boat" in Samoan), and feeling connected to her culture.

"It uncovers the history and you can make your own history while you sail, go on that big boat and make your own," she says, gesturing to the Samoan Voyaging Society's double-hulled canoe, the Gaualofa.

The history Emma refers to is that of a feat either worthy of, or too complex for a Disney movie, depending on who you talk to.

It is the real-life epic of the people who populated vast specks of land dotted across an ocean that takes up nearly a third of the face of the Earth.

They did so without maps or navigational instruments, but by memorising stories from their forbearers and reading the stars, currents and waves.

They are skills that Xavier Lui says have been all but lost in Samoa.

"Life has changed and we've now become land people, no longer the sea voyagers that we were back in the days where the ocean was our playground," he says.

"The first time I took these girls on the va'a we had some guests, some older Samoan ladies, and they said to me 'are you serious about taking the girls out there?'

The story will sound familiar to anyone who has seen Moana, the latest Disney film.

It begins on a fictional Pacific island where villagers are too scared to take their fishing canoes beyond the reef.

Despite her father's warnings, teenage Moana — which means ocean in most Polynesian languages — finds herself drawn to the water.

When the fishing nets start coming up empty within the reef, her grandmother shows her a hidden fleet of boats that their ancestors once used to sail far and wide.