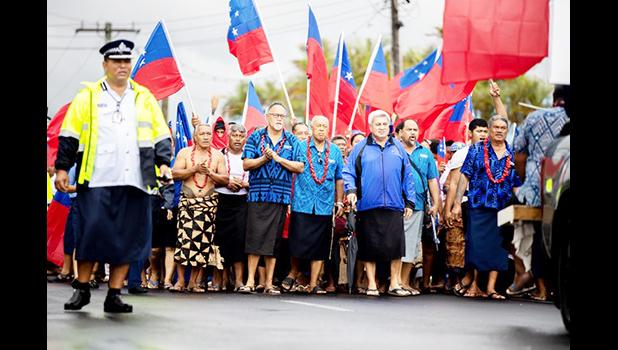 Apia, SAMOA — The Human Rights Protection Party's (H.R.P.P.) leaders told a thousand-plus supporters on Monday that their role as an opposition had begun with protests and would not stop until “constitutional” Government was restored to Samoa.

The minority party claims that only the Head of State may call for Parliament to sit under the supreme law of Samoa. But a series of court judgments have found his power is explicitly constrained by the constitution. And by failing to convene Parliament within 45 days after the election he explicitly breached the provisions of the constitution.

A large crowd gathered at the Fiame Mata’afa Faumuina Mulinuu II (FMFMII) building early in the morning in preparation to protest what they claim to be the "disintegration" of the Constitution.

Protestors of all ages walked two kilometres from the FMFMII building to Malae o Tiafau, despite sporadic downpours and sang traditional songs in unison to rally against the judiciary's decision to install the new Government.

H.R.P.P. leader, Tuilaepa Dr. Sailele Malielegaoi, greeted the large crowd and said the event was to voice the opinions of the “silent majority”.

“This is our sacred ground; where we witness the raising of our flag of independence and sing our national anthem of our freedom,” he said.

“Again and again we stand to pronounce our independence and the rule of law, enshrined in our constitution, the Constitution that was passed after months and months of debate by 165 leaders from our constituencies and our four leaders Tama Aiga.”

The rally on Monday comes after the party's supporters participated in a vehicle convoy protest against the judiciary last Friday.