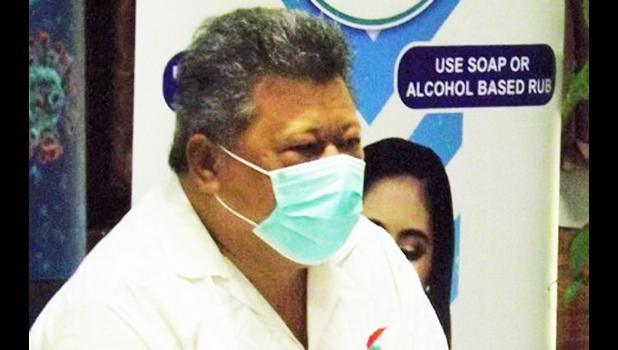 Apia, SAMOA — Confirmation whether Samoa has a Covid-19 infection or not should be received this weekend.

A Samoan sailor who returned on a repatriation flight from Auckland last week tested positive for the coronavirus on Wednesday night despite previously testing negative.

A subsequent test also came back negative but samples have been sent to New Zealand for confirmation.

He said the swab would be transported from Auckland Airport directly to the ESR Lab in Wellington for testing, with a blood sample to follow.

The Samoa Director General said the test result should be known this weekend.

Leausa explained that in total there were three negative results and one positive for the 23 year old sailor who had travelled from Europe via Dubai and New Zealand.

He had a negative test result in Italy before departure, tested negative upon arrival at Faleolo Airport and negative again on Thursday morning.

The one positive coronavirus test he received while in quarantine.

Leausa said the sailor was in isolation at Motootua Hospital and was not showing any signs of symptoms of the virus.

His roommate at the quarantine site in Samoa, was also taken to the hospital even though he hadn't tested positive, as a precautionary measure.

Samoa has three more repatriation flights scheduled before the end of the year, and Prime Minister Tuilaepa Dr Sailele Malielegaoi has confirmed during a press conference  earlier this week, that there are no changes, and scheduled flights will continue as planned.

“There is no need to panic or disrupt the plans already underway for these flights,” said Tuilaepa.

“The young man who tested positive is in isolation and we have every confidence in the systems and processes we have in place, that ensures this single case will be well contained”, assures the Prime Minister.

“Our students overseas will be stranded, and need to be brought home, as well as other citizens who have been planning and preparing to come home on those flights”.

the Prime Minister said that critics of repatriation flights have to remember that Samoa has had a suicide case, as well as untimely deaths of those who have been stranded and stuck overseas, since the closure of international borders.

Tuilaepa said we must remember the biblical principal of “do unto others as you would like it to be done unto you..”

The three flights remaining include a direct flight from LAX and two more from Auckland.

A special wide body Air New Zealand Boeing with a seating capacity of just over 300 has been chartered to repatriate citizens from the United States, scheduled to arrive on Friday 27th November 2020 from Los Angeles International Airport (LAX) to bring home citizens from Europe, North and South America and Hawaii.

Samoa’s NEOC Interim Chair Agafili Shem Leo said in a press statement earlier this week that, “Heightened vigilance and compliance with entry requirements and plans for its management, as with all flights, will continue to be enforced”.

Another two flights are scheduled for 04 December and 11 December, mainly to bring home Samoan students who study in New Zealand and Australia throughout the year, as well as seasonal workers and other citizens of Samoa.