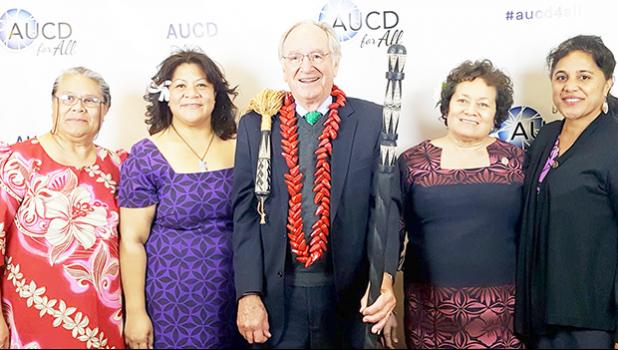 WASHINGTON D.C. — Wednesday evening at the Association for University Center on Disabilities (AUCD) Gala4All Event in Washington DC, a Samoan cultural presentation closed the annual event for the evening.

U.S. Congresswoman Aumua Amata Coleman Radewagen presented the traditional to’oto’o and fue to U.S. Senator Tom Harkin (Retired) for his 40 years in Congress as an active advocate for people with disabilities.

Director Tafa Tua-Tupuola of University Center for Excellence in Developmental Disabilities (UCEDD), a member of AUCD, extended the Gala4All invitation to Congresswoman Aumua Amata, who has a sister with Down syndrome, welcomed the invitation.

In a speech to the Senator, Tafa highlighted that the history of the ADA and IDEA and the stories collected over the years from the disability community and family members not only protected citizens of the U.S. but reached as far south of the equator to American Samoa.

Senator Harkin with humility accepted the presentation from the Congresswoman and extended congratulatory remarks on her reelection and expressed to the UCEDD Director “I guess you’re right. You’ll never know when you’re working late nights putting a piece of legislation such as the ADA and IDEA and all the other legislations for the people, you don’t think it’ll go anywhere beyond the continental of the United States.”

The senator has a brother who is deaf, and who had a great influence on his advocacy role in Congress. Sen. Harkin spoke and also did sign language at the National Democratic Convention.

The UCEDD Director, Tafa Tua-Tupuola, also presented a Samoan tanoa and siapo to the AUCD Executive Director Andy Imparato as a symbol of welcoming AUCD presence in American Samoa last month, and on leadership including the territories at the table in national advisory councils. Imparato was in the territory last month to visit the work of the UCEDD at ASCC and in the community.

While in town he presented on Disability Rights and Public Policy to the AS Bar Association, participated at the AS Legal Aid Board meeting, and attended the 5th Pacific Regional Disability Conference in Apia, Samoa. Imparato was responsible for nominating Tafa Tua-Tupuola to the Federal Communication Commission – Disability Advisory Council for two terms and is a person with a disability who served as Senior Legal Counsel for Sen. Harkin.

Imparato is hoping to bring more advocates from the Pacific islands to participate in the upcoming Harkin International Disability Employment Summit in November held in Washington DC.

The to’oto’o and fue will be displayed at the Drake University-Harkin Institute on Public Policy and Citizen Engagement.