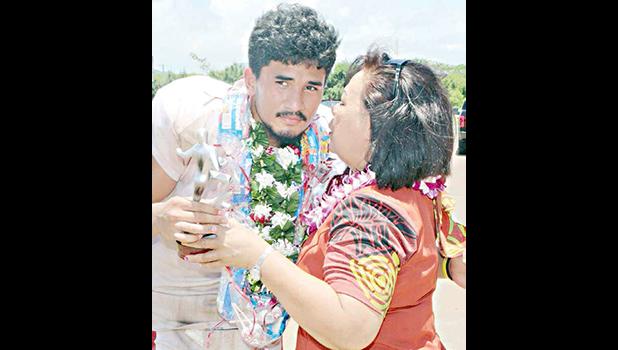 Pago Pago, AMERICAN SAMOA — On Monday, Tafuna High School’s Oakie Salave’a became the latest player to verbally commit to Colorado University for the class of 2022. According to Colorado media reports, he plans to sign his letter of intent today (Wed. Dec 15).

Salave’a is the son of former Buffs defensive tackle Okland Salave’a, who played in Boulder from 1988- 89.

“My father played there and shared stories all my time growing up,” Salave’a told the Boulder Daily Camera reporter, Brian Howell. “It’s something that motivated me to be able to share my own stories one day. It was definitely a driving factor (in committing to CU). I look up to my dad and all his accomplishments, so I’m blessed to be able to follow in his footsteps.”

The 6-foot-3, 215-pound Salave’a says he is coming to CU as a quarterback, but it’s possible he will wind up playing safety for the Buffs.

“My main focus is to put our team in the best position to win, whether on offense or defense,” he said. “I’m a team guy and winning (is priority), so whatever it takes to accomplish that I’m willing to do. I’m coming in to work my tail off regardless of position.”

Salave’a will take an official visit to CU on Jan. 7. He will play in the Polynesian Bowl in Honolulu on Jan. 22 and plans to enroll at CU after that game.

Rated by 247Sports.com as the top prospect from American Samoa, Salave’a originally committed to San Diego State in June. He had a change of heart last month and de-committed from the Aztecs. A few other schools, including Arizona and Utah, expressed interest.

“I’m so excited,” he said. “Being in American Samoa, we have limited resources. We play on a mixture of grass, sand and gravel. Equipment is broken, uniforms limited. So, to play at the collegiate level with great facilities and many resources, it’s a dream come true.
“Not many of my brothers here get this opportunity, so I’m going to make everything out of it and hopefully bring some of my brothers on the rock to Boulder with me come fall.”