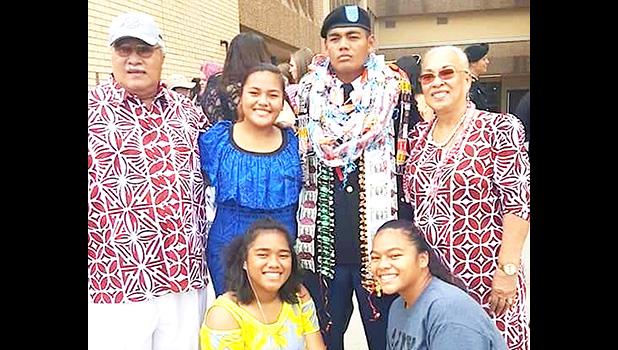 Joint Base Pearl Harbor-Hickam, HAWAII — For some, the calling to serve something greater than you doesn’t necessarily come natural, but for others it is something instilled within from an early age. Some of us understand that the blessings that we receive in life, come from the blessings we give unto to others. For the youthful, Pfc. Washington Pou Ameperosa, a native of Laulii, American Samoa, selfless service has been apart of his life through tradition, culture and simply from his will to give.

Starting on the island of American Samoa, his selfless service has carried him to the U.S. Army and will continue to serve him well through the course of his life.

The selfless service of Ameperosa has led him to impact communities throughout the Pacific.

Ameperosa was born and raised on the island of American Samoa. He is the eldest of his three siblings and has always sought to set a positive example for them. He grew up playing rugby, volleyball and regularly attended church, as his grand parents were both pastors.

Since he was a youth, he was regularly involved in fellowshipping with church members and serving his community. He cites his mother as one of his biggest influences.

“I always see her helping others out back home, at work, church, church members, people in the village and people she hardly knows,” he stated. “That planted the seed.”

In addition to serving others, he also continued to pursue a higher education upon his graduation from Kanana Fou High School in 2015. He then attended American Samoa Community College and earned his Associates Degree in Criminal Justice in 2017.

Once he completed his first degree, he began exploring options outside of the island of American Samoa that would allow him to share his island heritage, faith and selfless service with others. The United States Army became that option when he enlisted.

“I wanted to leave home and I knew the military had a lot of opportunities,” he remarked. “It helped me and my family.”

He is a first generation service member in his family and currently serves as an Air Defense Enhanced Early Warning System Operator with the 94th Army Air and Missile Defense Command at Joint Base Pearl Harbor-Hickam, Hawaii. He looks forward to working hard, earning his promotion to specialist and becoming technically proficient in his job field.

Similar to when he was living on the island of American Samoa, he continues to serve the community in which he lives.

“The relationship you have with the people in your village, it’s a real big factor,” he stated.

He is a member of One Mission Church and has volunteered for community service whenever he has the time. Recently, he participated in a community service-recycling project in which he helped fill over 10 jumbo-sized trash bags with recyclables found on the street.

“Whenever the church needs to do something with community, I’m pretty much there,” he said. “I love helping out, its how I’ve been raised.”

From the time he was brought up in American Samoa until his time in service, he has been a shinning example of what to strive to be in today’s society; selfless, hard working and dependable. Not only has he set an example for his village in American Samoa, but also he is also setting an example for his subordinates and peers here in the 94th AAMDC.

“They all should be really proud of what he’s been doing and where he’s going to go,” said Hilstro.