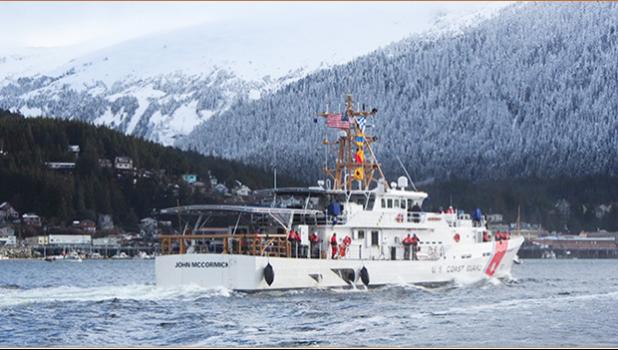 Pago Pago, AMERICAN SAMOA — The U.S. National Security Advisor Robert C. O’Brien has signaled that in an effort to bolster U.S. capacity and presence in the Indo-Pacific region, in Fiscal Year 2021, the US Coast Guard plans to evaluate the feasibility of basing Fast Response Cutters in American Samoa.

“The United States promotes a free and open Indo-Pacific region where likeminded nations uphold the international rules-based order,” states a press release issued by his office on Friday, Oct. 23.

“An increased Coast Guard protective, response, and rescue presence is yet another demonstration of the U.S. commitment to the Pacific region, to American Samoa, and to free navigation, the safety of our people, and the importance of the fishing industry that our local economy relies on.”

The National Security release leads with a big push back to China and their fishing vessels.

“The United States is a Pacific power.  The People’s Republic of China’s illegal, unreported, and unregulated fishing, and harassment of vessels operating in the exclusive economic zones of other countries in the Indo-Pacific, threatens our sovereignty, as well as the sovereignty of our Pacific neighbors and endangers regional stability.  Efforts of the United States Government, including the United States Coast Guard (USCG) are critical to countering these destabilizing and malign actions.”

The statements says that while the USCG continues to modernize and enhance the capabilities of its fleet of major cutters, the Coast Guard is strategically homeporting significantly enhanced Fast Response Cutters in the western Pacific and, “In an effort to bolster our capacity and presence in the Indo-Pacific region, in Fiscal Year 2021, the USCG plans to evaluate the feasibility of basing Fast Response Cutters in American Samoa.  If the survey is favorable, the United States could further expand its presence in the South Pacific.”

The new generation of Fast Response Cutters will conduct maritime security missions, such as fisheries patrols, enhance maritime domain awareness and enforcement efforts in collaboration with regional partners who have limited offshore surveillance and enforcement capacity, and ensure freedom of navigation.

The bottom line for the U.S. is that this move will “enhance the presence” of the USCG in the Indo-Pacific, ensuring the “United States will remain the maritime partner of choice in the region.”

In a conference call with reporters, O'Brien told Honolulu Civil Beat,  a major concern among the U.S. and its allies has been the People’s Maritime Militia — a paramilitary force of military-trained fishermen who occasionally work on behalf of the Chinese Navy, conducting surveillance and other operations.

Their boats appear no different than any other Chinese fishing boat, but they’ve been known to harass ships from other countries and stake out disputed waters in the South China Sea. Last year Chinese fishing vessels swarmed an island in the Philippines in what was seen as a territorial grab.

There are some indications they may be going well beyond the South China Sea.

O’Brien noted that a suspicious — and aggressive — fleet of Chinese fishing vessels appeared this summer in the Galapagos Islands and clashed with the Ecuadorian Coast Guard. “We’ve seen just this massive 200-plus flotilla of what some are calling ‘the little blue men,’ which are kind of like Putin’s ‘little green men’ that he had in Crimea, and eastern Ukraine.”

“It’s just like a marauding band of fishing trawlers that come through and strip fish and then dump garbage and plastic all over the ocean,” O’Brien said of China’s sea militia. “It’s not a good thing.”

O’Brien said there’s no known case yet of the militia operating in U.S. Pacific territories at the moment, but that with their increasing prevalence across the region “it’s something that we’re concerned about.”

Conflict over fisheries is leading countries around the region to take matters into their own hands. In 2018 Vietnam formed a fishing militia of its own to stand up to Chinese vessels and this month the Philippine Navy announced it would begin recruiting and training fishermen to form its own militia.

“That’s why we want to get more Coast Guard presence out there to support our fellow Americans and our friends in the region,” said O’Brien.