ASEDA board gets 3 new board members 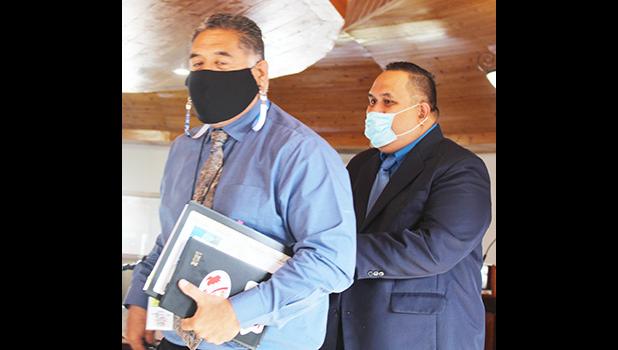 It’s “an economic development board — make sure, don’t borrow any money to pay debt,” Senator warns
By
Fili Sagapolutele
fili@samoanews.com

Pago Pago, AMERICAN SAMOA — The Senate during its session yesterday endorsed the governor’s nomination of three new board members of the American Samoa Development Authority (ASEDA) while two new nominees were introduced during first reading.

Prior to the vote, the three nominees appeared yesterday morning before the Senate Budget and Appropriations Committee for their confirmation where committee chair, Sen. Utu Sila Poasa offered them a recommendation.

“This is an economic development board — make sure, don’t borrow any money to pay debts. It’s supposed to be development. When you go out there, please try to borrow money to develop the economy, not to pay off debts, ok. That’s not the way you do it. If you pay off debts it’s going to be more debts,” Utu told the nominees.

Sen. Magalei Logovi’i, who represents the Senate on the ASEDA board, shared with his colleagues that work carried out by the board is not an easy one, as they dealwith  — among other things — off island investors. He said a lot of complicated issues are involved in the board’s work and responsibilities and he thanked the governor for the appointment of the three nominees, who have knowledge and experience.

In his nomination letter to Fono leaders, Gov. Lemanu Peleti Palepoi Sialega Mauga explained that Fainu’ulelei, as the attorney for ASG, will complete the term of former attorney general Mitzie Jessop-Ta’ase and that terms ends June 30, 2024.

For Mitchell, who represents the Governor’s Office on the board will complete the position left vacant by the resignation of former Gov. Lolo Matalasi Moliga’s executive assistant, Iulogologo Joseph Pereira. That term ends Jan. 30, 2023.

According to the governor, King will assume the post that was left vacant by the resignation of former ASG Treasurer, Ueligitone Tonumaipe’a.

Lemanu points out that he has already appointed current ASG Treasurer Malemo L. Tausaga to the board. “Traditionally, the serving director of Port Administration is on the ASEDA board. His term will end June 30, 2023,” the governor explained.

He further explained that these members are appointed in their capacity based on their current positions. “Should any of the members leave their positions in government, they will be expected to resign from the ASEDA board,” he said.

Introduced yesterday during the Senate session, was the governor’s nomination of Lefiti Falelauli’i Pese as Commissioner of the Department of Public Safety (DPS) and Rep. Vailiuama Steve Lasiolagi as a new member of the Development Bank of American Samoa board of directors.

In his nomination letter to Fono leaders, the governor notes that Lefiti has served the Territory for 40 years. And that his years of service in ASG  as well as the Judicial Branch is “a testament to his commitment and dedication to the territory.”

For Vailiuama, who is also the House Budget and Appropriations Committee chair, he will fill the vacancy left open due to the resignation of Timusa Tini C. Lam Yuen, according to the governor in his nomination letter to Fono leaders.

Vailiuama will servedon the board for a two-year term as set forth in local law, according to the governor.

These two nominations were assigned to the appropriate Senate committees for confirmation hearings next week.

Samoa News points out that Timusa was the Tualatai faipule in the 36th Legislature and was unseated during last November’s general election.