AP Analysis: Trump is the fault line of widening divide 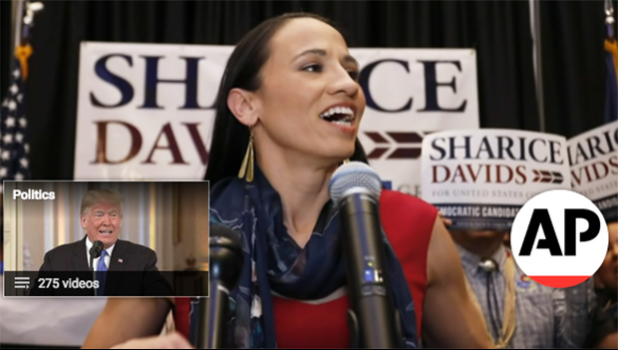 In a single flurry of elections Tuesday, Democrats took control of the House of Representatives. Republicans held their grip on the Senate. And the breach that divides Americans — urban from rural, white from black, conservative from liberal — stretched ever wider.

The midterm results highlight a political sorting in America that has accelerated during Donald Trump’s presidency. Race, class and geography separate the parties as much as ideology, with the president as the dividing line.

Democrats surged to their new House majority by picking up seats in more affluent and highly educated suburban districts. Voters in the suburbs skewed toward Democrats by a nearly 10-percentage-point margin, according to AP VoteCast, the national survey of the electorate.

But the Democratic gains were limited to the House. The Senate landscape told a different story, of a segment of the country that looked far different.

The GOP victories appeared to reinforce the politics behind Trump’s closing message — a mix of dark, inaccurate warning about an “invasion” of immigrants streaming across the U.S. border. The fear, it seems, does motivate Republicans. And few can summon that anxiety like Trump.

“He is absolutely the only Republican who could generate the kind of enthusiasm in the base that was necessary to compete in a really difficult midterm,” said Josh Holmes, a longtime political adviser to Senate Majority Leader Mitch McConnell.

With each party taking control of one chamber of Congress, and another presidential election fast approaching, these divisions will be a defining feature of American politics through 2020. Each party now has a template for success in the Trump era and will spend the next two years trying to replicate it.

The midterm results hold some long-term promise for Democrats, a party that was banished to the political hinterlands in 2016.

Some Democratic-leaning states that flipped for Trump two years ago — Michigan, Wisconsin and Pennsylvania — swung back to the left Tuesday, electing Democrats in key Senate and governors’ races. That suggests Trump’s victories in the Midwestern battlegrounds could have been an anomaly, not a permanent realignment.

The president can take solace, however, in the fact that Republicans were victorious in Ohio and Florida, two of the most important political battlegrounds. In Florida, Trump acolyte Ron DeSantis defeated Democrat Andrew Gillum, the young, black mayor of Tallahassee who had appeared poised to become a national party star.

Demographics remain a looming problem for Republicans in a nation that continues to grow more diverse. Unless the GOP can boost its appeal with minorities, as well as younger Americans, the party may simply run out of voters to carry its candidates to victory.

But what’s good for the Republican Party long-term is not necessarily Trump’s focus.

The president spent little time during this election year trying to win over his critics or bring highly educated voters back into the Republican fold. He doubled down on the issues that helped him win in 2016, particularly hardline immigration policies.

But those same political maneuvers cost Republicans in the House, where the fight for control played out in moderate, suburban districts Trump lost in 2016. A strong economy and a pro-business tax plan that Republicans believed would appeal to the wealthier, better educated voters in these areas were overshadowed by the president’s vitriol.

Trump now faces a choice as he plunges into his own re-election campaign. He can moderate his policies and his tactics and try to appeal to those voters who abandoned the GOP this year. Or he may conclude that the same coalition of voters that carried him to the White House two years ago will show up in large enough numbers when his name is on the ballot.