Changing the channel on the bad rerun of shooting coverage 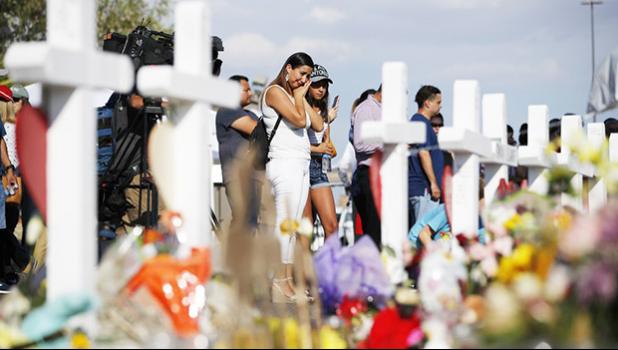 NEW YORK (AP) — Revulsion over the weekend’s twin mass shootings and the nagging sense that it’s all an inconclusive rerun has frustrated the news media and those who rely upon it — and triggered the stirrings of a new debate over how such tragedies should be covered.

“It’s time for journalists to take sides,” tweeted prominent Columbia University professor Bill Grueskin, and he’s not just a voice in the wilderness.

News outlets have been dominated by coverage of the shootings that killed 31 people in El Paso, Texas, and Dayton, Ohio. Editors at The New York Times discovered the extent to which nerves are frayed when they put together the newspaper’s Tuesday edition.

This image shows a tweeted version of The New York Times front page for Tuesday, Aug. 6, 2019, with a headline that reads: "“TRUMP URGES UNITY VS. RACISM." The headline, in the paper's first edition, caused an outcry that triggered a new debate over how such tragedies should be covered. (The New York Times via AP)

“Let this front page serve as a reminder of how white supremacy is aided by — and often relies upon — the cowardice of mainstream institutions,” New York Rep. Alexandria Ocasio-Cortez wrote in a tweet.

The newspaper called the headline flawed and changed it to, “ASSAILING HATE BUT NOT GUNS” in later editions and online.

Similarly, The Associated Press got online criticism for using the phrase “mass shootings” to refer to the carnage, with some readers suggesting “murder” was more appropriate. The news service’s rules forbid using the word murder unless an assailant was convicted of a crime.

Fox News’ Shepard Smith wearily captured the impotence of the by-now-rote response to each mass shooting.

“We hear you,” he told viewers in an essay that opened his show Monday. “We heard you the last time. And the time before that and we will likely do it all soon, yet again in America.”

The ritual makes journalism seem futile, said John Temple, a professor at the University of California at Berkeley who was a newspaper editor in Colorado at the time of the Columbine shootings.

Journalists feel the need to bear witness, Temple wrote in Atlantic magazine, but to the same horror, again and again?

“I can’t say any more that I believe we learn from terrible things,” Temple said. “I can say that I’ve seen the limits of journalism — and of hope. And I’m struggling with what to do about it.”

The futility led Columbia’s Grueskin, a veteran of the Miami Herald and Wall Street Journal, to suggest taking sides. He said the issue reminds him of the civil rights movement, where the moral importance led many reporters to cast aside doubt as to who was right and wrong.

Gun violence and climate change are issues that deserve the same treatment today, he said.

“Politicians who are too craven or mealy-mouthed to acknowledge the depth and breadth of these problems, and the need to enact serious reforms, will someday be looked upon the way we now think of Strom Thurmond or James Eastland,” Grueskin said, referring to the segregationist senators from South Carolina and Mississippi. “Journalists have every right, and every obligation, to point that out.”

How to put this idea into practice is the hard part.

“O’Rourke’s words were a moment of moral clarity that America so desperately needs,” wrote Will Bunch, a columnist for the Philadelphia Inquirer. “We just need a lot more. This cannot be business as usual.”

Not everyone agrees, as O’Rourke’s primary opponent, Ohio Rep. Tim Ryan, found out when he pointed to Trump’s words in an appearance on Fox News Channel. Host Neal Cavuto argued that his guest was taking things too far to suggest Trump inspired the El Paso shooter.

They went back and forth, before Cavuto cut off the interview with Ryan in mid-sentence.

Cable news advocacy has damaged the reputation of journalism in general, said Will Norton, dean of the School of Journalism and New Media at the University of Mississippi.

Many people already expect news served up with a point of view. So if journalists more actively take sides, Norton said it will make things even worse with people who already believe the media is biased.

“You just wonder why an incident like this happens and the media covers it like crazy and then it doesn’t come up again until the next killing,” Norton said. “The way that you cover these things is you keep it before the public and let them know how important it is.”

For Lucy Dalglish, dean of the University of Maryland’s Philip Merrill College of Journalism, it was working with surviving journalists from the Capital Gazette after the 2018 attack that killed five staff members at the Annapolis, Maryland, newspaper that led her to question her old assumptions.

For generations, journalism students have been told to check their feelings at the door when it’s time to work, she said.

“It’s becoming tougher and tougher to do that,” Dalglish said, “because the way we’re covering this doesn’t seem to matter anymore.”