How to spot lies, 'fake news' and propaganda 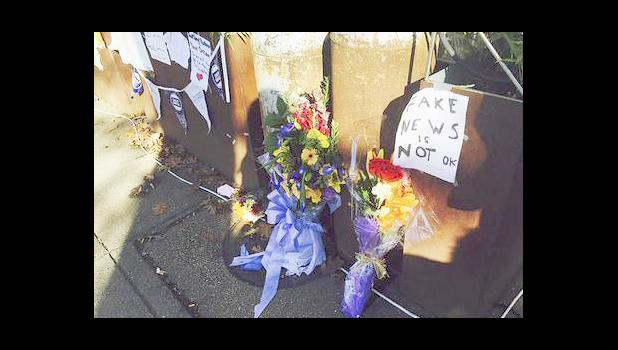 A Washington, DC, pizzeria is a front for a child sex abuse ring.

George Soros will "bring down" the U.S. by funding "black hate groups."

These are just some examples of viral stories circulated on social media recently that are completely untrue. Facebook on Thursday announced some steps it's taking to stop the spread of such "fake news" on its huge social network.

This includes working with outside fact-checking organizations and drying up financial incentives to what it calls the "worst of the worst" spammers that traffic in made-up stories. But there are basic things news readers can do themselves to spot fake news. And if you want, you can report them to Facebook, which can flag stories for fact-checkers to evaluate.

Some hoax sites, designed to draw you in for advertising revenue, feature designs that resemble legitimate, well-known websites. Such "spoofing" can be quite effective - but there are often telltale signs to indicate their true nature.

For example, you should be vary of articles on sites whose addresses, or URLs, that end in "com.co," writes Melissa Zimdars, a communications professor at Merrimack College whose own list of "fake news" sites went viral. (She has since taken it down and published a more general guide .) You can also check the website's "about" page, its list of contacts, and other stories and photos on it. Poke around a little; if things look less-than-official, you're probably on a spoof site.

Random use of ALL CAPS? Lots of exclamation points? Does it make sense when you read it out loud? Can you imagine a TV newscaster reading it out loud? Is there something just off about it? Does it sound very angry, inflammatory, emotional? None of these are good signs.

- POKE AROUND FOR OTHER COVERAGE

If a story is real and really big, you will likely (though not always) see some version of it from multiple sources. Is it on sites like ABC News, The Associated Press, the New York Times, or other places you have heard of? Is it featured in your local newspaper, the one printed on actual paper?

Let's put it this way: If the pope actually endorsed Trump, you'd see it everywhere.

Anonymous sources can appear in legit as well as made-up news stories. But Googling the people who are named in a story is a good way to check whether the story itself is real. They might have a LinkedIn profile, or appear in other news stories, for example. Someone says they are a university professor? Google the name of the university. Is it a health study on a new cure for cancer? Look it up.

Instead, click on the link and read the story before hitting the "share" button. If you believe a story someone shared is fake, you can post a comment, or report it to Facebook for outside fact-checking by clicking on the gray arrow on the upper right corner and selecting "report this post." You'll get an option for "It's a fake news story.