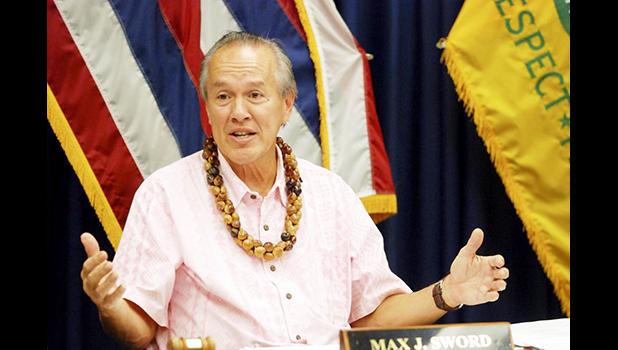 HONOLULU (AP) — Three former Honolulu officials were arrested Wednesday for allegedly conspiring to hide the source of public funds used to get a police chief to retire amid a corruption investigation that ultimately put him and his former prosecutor wife in federal prison.

Their attorneys pleaded not guilty to conspiracy for them during a court hearing where a judge ordered their release on $50,000 bond.

According to an indictment, the trio arranged for ex-chief Louis Kealoha’s $250,000 payout in 2017 after federal authorities informed him he was a target in the investigation.

They tried to “conceal the details of the Kealoha payout form the City Council and the public,” the indictment unsealed Wednesday said.

A jury convicted Kealoha and his wife Katherine Kealoha of conspiracy for framing a relative to keep him from revealing fraud that financed their lavish lifestyle. Kealoha is serving a seven-year prison term and his wife is serving a 13-year sentence.

Amemiya, Leong and Sword arranged to use police department funds allocated for salaries, causing a salary shortfall, to circumvent approval from the City Council, the indictment said. City council members had been questioning Kealoha’s retirement agreement.

After Sword announced that Kealoha agreed to retire, police told him they couldn’t fund the payout from its budget, the indictment said.

Leong suggested falsely claiming police used the money to hire new employees and then later request additional funding to make up for the shortfall, the indictment said.

When police officials pressed Sword on why the money had to come from the department he said, “So you don’t have to go to the seven bananas I mean nine bananas up at the council,” the indictment said.

Covering up where the money came from begs the question of why they didn’t just go to the council for approval, said Alexander Silvert, the former federal public defender who represented the man the Kealohas framed for stealing their home mailbox.

“What did chief Kealoha know? What dirt did he have that he needed to be paid off in this manner?” said Silvert, who was instrumental in unraveling the Kealohas’ plot that prompted the federal investigation. “It makes it look like hush money.”

Leong’s attorney, Lynn Panagakos, said in a statement that the severance payment to Kealoha was legal and in the best interest of Honolulu.

“It is beyond ironic that the same attorneys that prosecuted the Kealohas for corruption, are now accusing Donna Leong for legal actions she took in relation to the Honolulu Police Commission’s decision to expeditiously separate former chief Kealoha from HPD, for the benefit of HPD and the community,” Panagakos said.

Amemiya’s attorney, Lyle Hosoda, said his client is disappointed with the decision to pursue the charges he called “false and baseless.”

“The Indictment itself shows that Mr. Amemiya was not involved in the decision regarding Chief Kealoha’s disassociation and severance from HPD. Mr. Amemiya learned of this action at the same time the public learned through the news media,” Hosoda said.

Sword was merely following legal advice from city officials on Kealoha’s settlement, said a statement from his attorney William McCorriston.

“We will vigorously defend Mr. Sword from this unjust charge,” McCorriston said.

Kirk Caldwell, who was mayor at the time, couldn’t immediately be reached for comment.

In response to asking Caldwell to comment on the allegations, his attorney, Lex Smith, issued a statement saying Amemiya, Leong and Sword are “innocent unless and until proven guilty,” and that Smith “will be interested in the coming days and weeks to understand the charges that have been brought against them.”

For background on this story, link to an in-depth report at Honolulu Civil Beat