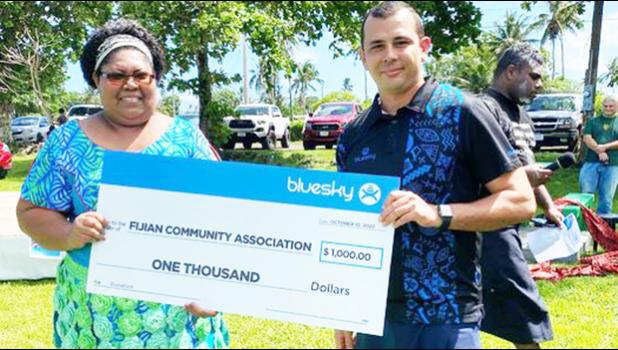 Pago Pago, AMERICAN SAMOA — The local Fijian community in American Samoa gathered with their families and friends on Saturday, October 10, 2020 at the Lion’s Park to celebrate their nation's Golden Independence Anniversary. The local celebration commemorates the day Fiji took its place in the international community as an independent state after 96 years of British rule.

In the spirit of community goodwill and recognizing this milestone, Bluesky presented the American Samoa Fijian Community Association with a donation of $1,000 and in-kind products. The well-attended event enabled the local Fijians to showcase delicacies, traditional and modern fashion attire, songs and dances.

Bluesky is a major employer in American Samoa. Its workforce consists of 94% local employees and specialists from Fiji. The telecom company is owned by Amalgamated Telecom Holdings (ATH) of Fiji.

“Bluesky is grateful of the local Fijian's support and their contribution to our local community and we wish all the Fijians living in American Samoa all the best in their celebrations today”, said Bluesky’s Chief Technical Officer Stuart Fong.