Census Bureau reaching out to Pacific peoples through music 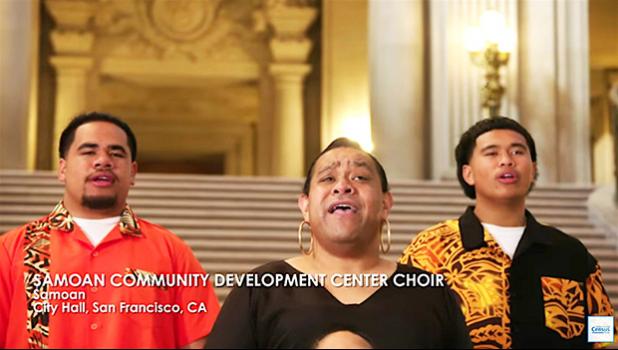 Native Hawaiians and Pacific Islanders (NHPI) share a common bond and heritage. But whether they live in Hawaii, on another island or on the mainland of the United States, the NHPI community is also connected through its traditional music.

For the last few months, a groundbreaking music video collaboration has taken shape in Hawaii and various cities throughout the United States to highlight how NHPI people live in all parts of the nation and to encourage their response to the 2020 Census this spring.

To date, the video has had more than 1 million views on Facebook.

The music video features award-winning Native Hawaiian and Pacific Islander musicians performing a cover of “This is Me” from the acclaimed film, The Greatest Showman.

Artists featured in the video:

The video was shot in Honolulu, San Francisco, Los Angeles, Salt Lake City and New York City. (See it at bottom of this page.)

“We chose locations with iconic scenery from some of the biggest cities in America,” said John Aeto, founder of the Kālaimoku Group, a Native Hawaiian-owned marketing agency that is part of Team Y&R, the communications agency hired by the U.S. Census Bureau to manage outreach for the 2020 Census.

“We wanted to show that there are footholds of Pacific Islanders all over the nation where our people are thriving while continuing to be rooted in their cultural identities,” he said.

Hawaiian Airlines is among Census Bureau partners promoting participation in the 2020 Census.

As part of this effort, Hawaiian Airlines will show the music video on all trans-Pacific flights, including every flight to Hawaii and to New Zealand and other Pacific Islands.

As of 2010, approximately 1.2 million people identified as NHPI, according to the U.S. Census Bureau. Over half (52%) live in just two states, Hawaii and California.

The video is part of an unprecedented communications campaign by the Census Bureau to reach everyone living in the United States with the message that the 2020 Census is easy, safe and important to complete.

“We are especially excited as this is the first time we’ve engaged a Hawaiian-owned marketing agency to help inform our communications efforts with the NHPI community,” said Julie Lam, director of the Census Bureau’s Los Angeles Regional Office.

The NHPI population has been historically hard to count, according to 2000 and 2010 Post Enumeration Survey results. The Census Bureau found that some in this population have a profound distrust of government or language barriers that have negatively influenced their participation in the past.

That’s why we are reaching out to raise awareness in multicultural communities about the importance of the 2020 Census.

The U.S. Constitution mandates a census of the population every 10 years. Census results help determine how many seats each state gets in the U.S. House of Representatives and help inform how hundreds of billions of dollars in federal funds are allocated for critical public services such as  health care clinics, schools, roads and bridges.