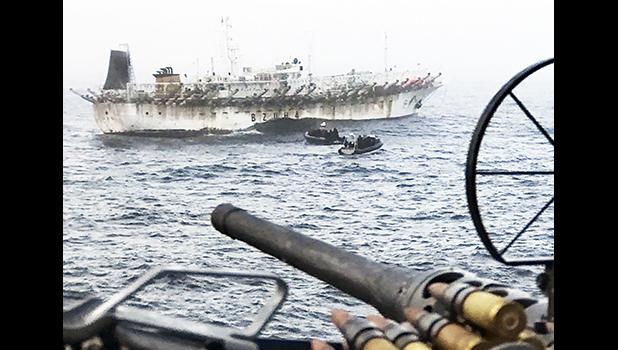 According to two former U.S. officials, “illegal, unregulated fishing by Chinese vessels has become common in American Samoa and Guam and as far east as Hawaii.”

American Samoa, noted for its volcanic peaks and tropical rainforests, is the southernmost territory of the United States.

At one point, a tuna cannery on American Samoa, one of the island’s largest employers, had to temporarily suspend operations due to a lack of fish.

China’s fishing fleets, which reach as far as Latin America, West Africa, and even Antarctica, have been adding to the strain on worldwide fishing stocks, according to organizations monitoring the issue.

In the past, the expansion of Chinese fishing vessels and their overseas reach has been fueled by tax breaks on imported fishing equipment purchased abroad, and by subsidies for fuel and vessel building. But it’s not clear how much of a role these factors have played in the South Pacific.

Members of a Chinese middle class who value high-quality fish in their diet are believed to be eager to acquire the tuna fish which can be found in the South Pacific.

Another much sought-after item is sea cucumber. Sea cucumbers are marine invertebrates related to sea urchins and star fish. They are used in soups and other dishes.

Other countries’ fishing vessels operate in the South Pacific as well.

Several years ago, the authorities in Palau burned four Vietnamese fishing boats off the island’s coast and arrested a captain. And a few years later, several Vietnamese boats were detained off the Solomon Islands and New Caledonia.

The Solomon Islands are a former British territory. New Caledonia, located 750 miles east of Australia, is noted for its palm-lined beaches and lagoon, which is a major scuba-diving destination.

But tourism, a major source of income and employment in the South Pacific, has dropped off here and elsewhere in the region.

In some cases local authorities have pushed back against Chinese fishing boat intrusions.

The Republic of Palau, a Pacific island nation whose close relations with Taiwan have angered China in the past, detained a Chinese fishing vessel and six smaller boats in early December last year.

According to The Guardian newspaper, Palau officials alleged that the Chinese boats had been harvesting sea cucumbers in its territorial waters.

Palau, an archipelago of about 500 islands and 18,000 people is one of Taiwan’s few remaining allies in the South Pacific. Last year, Palau asked the United States to build ports, bases, and airfields on its islands, according to a Wall Street Journal report, but it’s not clear where that offer currently stands.

But not all Chinese fishing vessels operate illegally.

Some Chinese fishing boats are legitimately operating in Vanuatu’s exclusive economic zone (EEZ) from a base in Fiji.

A South Pacific Tuna Treaty, an ongoing agreement between the United States and 16 Pacific Island nations, allows for purse-seine vessels to legitimately fish in the EEZs party to the treaty.

Purse-seining involves setting a large circular “wall” of net around fish, then “pursing” the bottom together to capture them.

But according to the nonprofit organization Greenpeace, purse seining is a bad idea when it also targets a by-catch of non-target species or fish that simply can’t stand the pressure on their populations.

In the worst case, some fish can be driven to extinction by simply failing to maintain a large enough population to propagate the species.

For skipjack, the smallest species and the staple of tinned tuna, purse-seining is used throughout the Indian and Pacific Oceans.

But skipjack tuna often shoal together with younger big eye and yellow fin tuna, and these end up in the nets as well along with sharks, rays, turtles, and other species of fish.

Big eye tuna is used as sashimi, a popular dish in both Japan and South Korea.

As Greenpeace notes, given the endangered species of Oceanic turtles, sharks, and big eye tuna, as well as the appetite for sushi around the world, the losers are traditional fishing communities who have been catching these fish with a minimal impact for centuries.

In addition to the damage to local livelihoods caused by Chinese and other fishing boats, it should be mentioned that another tragic development has been the destruction of tropical forests in the South Pacific. Most of this has been carried out by companies shipping timber to China.

As of 2018, China had become the world’s largest timber importer followed by the United States, the European Union, and Japan.

Meanwhile, two former high-ranking U.S. officials have argued that U.S. territories and possessions in the Pacific find themselves “on the front lines of Beijing’s malign influence, economic predation, and military ambitions.”

Writing for the web site “RealClearDefense” on March 11 of this year, Alexander B. Gray and Douglas W. Domenech allege that “not since the 1962 Cuban Missile Crisis, has a foreign power such as China posed such a direct military threat in close proximity to the U.S. mainland.”

But the two allege that “Washington policymakers have thus far barely recognized the growing threat to vital American interests on our own territory or in adjacent waters.”

Gray is a senior fellow in national security affairs at the American Foreign Policy Institute who served on the National Security Council from 2018 to 2021.

Domenech served as assistant security for insular and international affairs at the U.S. Department of the Interior from 2017 to 2021.