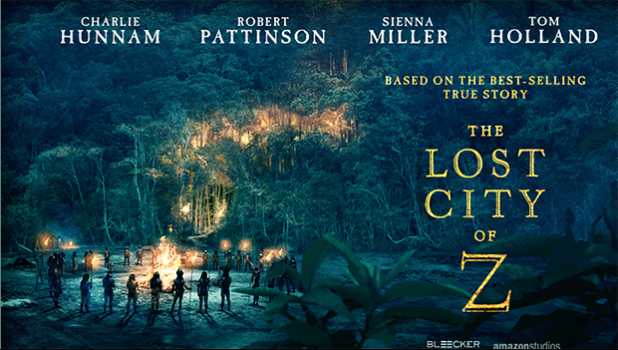 Cool Stuff hopes your Nu'uuli Regal Theater shares this intriguing colonial period piece movie, as its theme parallels both Samoas of the early 1900's thru today.

Charlie Hunnam (of Sons of Anarchy fame) stars as a young British military officer/ explorer who travels through Amazonia (Bolivia & Brazil) to map "unknown" waterways — unknown to Europeans, that is.

The sensitivity of Hunnam's true life character, Major Percy Fawcett, is that he seeks to prove that the indigenous Peoples of South America were sophisticated with great cities and empires in their cultural history. The British Royal Geographical Society scoffs, even after he presents physical proof of pottery, and relates the amazing farming capabilities in the middle of the rain forest.

If you have the patience to reflect during this 2 hour 20 minutes flick, think in analogy-terms how sophisticated historic fa'a Samoa village life was so vastly superior compared to the unhealthy lifestyles and nasty plagues of the 1500's era Europeans.

Yet when Europeans later popped up claiming to discover your hospitable island ancestors, the usual reported description was of some sort of "noble savage".

Now reflect if that attitude has changed. What do donor nations to Samoa, the US Government to the Territory and nonprofits to both Samoa's really think?

Is their assistance because they sincerely respectfully care, or do they seek economic (fishing, labor, trade, sell you mutton flaps & turkey tails), military (recruits or bases), religious (their faith is better?) or international political (think UN votes) advantage?

First hand Cool Stuff has witnessed condescending racism expressed by a prior palagi entertainment business owner in the Territory (based in the Mainland & Hawai’i), who would not let a Pacific Islander manage his businesses as they "Have no concept of time or details". The LDS Church’s Hawaii Reserves Inc. investigated this in 1994 and confirmed this, concerned as it occurred on their land. to their church members in Hawaii.

Another entity recently put on a big show of how they were going to help both Samoas with donations, but purportedly invoiced a Samoa (not ASG) government entity from a for profit entity, not their original non profit.

Major Fawcett sought to recognize indigenous achievements, not exploit and change the people. He was portrayed in the movie as a righteous conscientious man, far ahead of his time. He and his Hawai’i-born American contemporary explorer, Hiram Bingham III, were the purported role models for the Indiana Jones movie series.

Bingham ironically became a US Senator and Chairman of the Committee on Territorial & Insular Affairs, overseeing American Samoan's daily existence in the late 1920's

Samoans and intended visitors should learn from "Lost City of Z". Your late great grandparents will respect you if you do.

Maybe you could take Mom out to the "Lost City of Z" for Mother's Day.

Happy Mom's Day to all you Coolio Mothers... we appreciate your regular kind input to our column, even though only a 1/3 of you sip Samas & Vailimas with us and your Coolio husbands when we are Sama & Vailima "networking" at Sadie's by the Sea, Maliu Mai, Tradewinds, the Oasis, DDW, and Evalani's.