How Christmas came to Hawaii and the Pacific 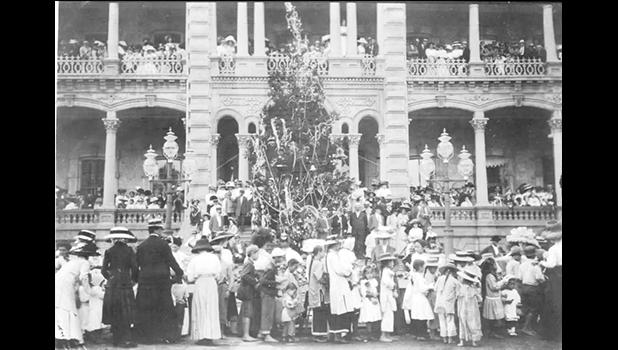 from the Ka’ahele Hawaii blog site

Honolulu, HAWAII — Despite numerous claims that the Missionaries brought Christmas to Hawai`i, that simply isn’t so.

The first Christmas celebration in Hawai`i took place 34 years before the arrival of the Missionaries – who promptly did what they could to discourage any further celebration!

Christmas Eve, 1786, Captain Portlock, captain of the sailing vessel, King George which was anchored off the Hawaiian Islands (known to English-speakers, as the ‘Sandwich Isles’, had gone ashore and given out trinkets to women and children he met. On Christmas Day, he had a visitor aboard the King George, and that night wrote in his log, “Kiana came off in a long double canoe and brought me a present of some hogs and vegetables which I received gladly, and made a return that pleased him very much.”

Far from home, the sailors had no contact with family or land-based friends. It could take years for a simple letter to reach a sweetheart. There was no such thing as speed-dial or e-mail.

To cheer their spirits, Captain Dixon ordered a celebration of the Christmas holy day. He had a holiday punch made by having the men’s ration of rum mixed with coconut juice. Island hog was baked into a sea-pie (a concoction of available meats layered with hardtack and lard and baked in a large iron pot) for the festive supper. Such fresh meat was a real treat for the sailors, who spent months at sea subsisting primarily on salt meat and hard biscuits.

Probably the sailors sang traditional carols of the British Isles, such as Here We Come a Wassailing, and I Saw Three Ships. Fiddles, guitars, banjos, harmonicas, flutes, and whistles were popular among sailors, and some of these instruments may have accompanied the songs.

Today in Hawai`i, our Christmas celebrations include customs from those early sailors, as well as traditions from around the world.

Reading Scripture, one finds no mention of Christmas. Therefore, the Missionaries felt, it did not qualify as holy. The Missionaries, strong proponents of scholarly learning, also disputed the date of Christmas celebrations, arguing that December 25 was the date of a Roman festival, hijacked by early Christians. To celebrate that day, they felt, was sinful homage to a pagan custom.

The Boston Missionaries were heir to the beliefs of Puritan England. Responding to certain political and religious excesses, in the 1600s, England underwent major reforms. After the Puritans came to power, in 1647 the celebration of Christmas, Easter, and Whitsuntide were outlawed in England. Her American colonies followed suit, and in 1659, Massachusetts included in their penal code a 5 shilling fine for celebrating Christmas. In 1681, the laws abolishing Christmas were repealed, but James Howard Barnett notes in The American Christmas (1984) that the Puritan view prevailed in New England for almost two centuries.

Despite the legalization of Christmas, New England officials still disapproved of celebrating the holiday, especially with any form of revelry. Decking the halls with boughs of holly – or any other greenery – was associated with pagan custom, and thus was expressly forbidden in Puritan meeting houses, and while not illegal, was discouraged in the New England home. Making merry could still bring prosecution for disturbing the peace.

We all have our cognitive dissonances, however. Although there is no mention of them in the Bible, somehow Election Day and Harvard Commencement Day were recognized days of rest in addition to the Sabbath. Days of thanksgiving and humiliation also were observed.

This was the mindset of the Boston Missionaries who, in 1820, sought to bring the Word of God to the Hawaiian people.

And so, at last, we come to Christmas Eve, the last day of Advent (the season of preparation for Christmas). It is fitting to now tell how the holiday officially was introduced to the islands, with all the pomp, pageantry, and festivity we associate with Christmas in Hawai`i today.

Alexander ʻIolani Liholiho Keawenui was born in 1834, the child of High Chief Mataio Kekūanāoʻa, governor of O`ahu, and Princess Elizabeth Kīnaʻu the Kuhina Nui of the Hawaiian Kingdom. Kuhina Nui was a position roughly equivalent to Prime Minister.

The young prince was educated by the New England missionaries to Hawai`i, but never seemed to quite inculcate their dour simplicity. Sent at age 15 on a visit to England, he was impressed by the richness and ceremony of the Church of England. Feted and honored in Europe and the British Isles, he experienced prejudice and bigotry in the American portion of his travels. This likely set the stage for his change of spiritual alliance.

When his uncle, Kauikeouli (Kamehameha III) died on 15 December 1854, Liholiho succeeded to the throne. He was sworn in as king of the Hawaiian Islands, Kamehameha IV, on 11 January 1855, at age 20.

This same year, Kamehameha IV decreed that December 25 would be celebrated as the kingdom’s national day of Thanksgiving. The politically influential and highly conservative American missionaries objected to Christmas on the grounds that it was a pagan celebration. However, the young king had allies.

Mary Dominis, the widow of Capt. John Dominis, descendant of Croatian nobility, wished to celebrate the Christmas holiday in high style. With a pro-Christmas monarch on the throne, on Christmas Eve of 1858 she hosted a lavish party for 100 of Honolulu’s children and their parents. She even had a Santa Claus to give Christmas presents to the children.

Mary Dominis also was noted for planting the first European-style garden in Honolulu, and is said to have grown a Christmas tree from a sprig that was sent to Hawai`i by ship.

In 1859, Queen Emma wrote to Queen Victoria of the U.K. to request a clergyman from the Church of England. The King’s foreign minister, Robert Crichton Wyllie, also made requests through diplomatic contacts for a mission to Hawai`i.

The mission was approved by Archbishop of Canterbury, John B. Sumner, and the British Foreign Secretary, Lord John Russell. Thus, Hawai`i’s first Bishop, Thomas Nettleship Staley, was consecrated on December 15, 1861 as the church’s first bishop of the Kingdom of Hawaii. He and his wife departed on 17 August 1862 and arrived in Honolulu in October 1862.

The King and Queen were anxiously awaiting the arrival of the new bishop, especially as they wished for him to christen their young son, Albert Edward Kauikeaouli Kaleiopapa a Kamehameha. Sadly, the royal heir died, and the new Bishop arrived at a court in mourning.

Joining the new Hawaiian Reformed Catholic Church, Kauikeouli and Emma were baptized on October 21, 1862 and confirmed in November 1862.

Shortly thereafter, Liholiho rescinded his decree proclaiming December 25 as a national day of thanksgiving, and formally proclaimed Christmas as a national holiday of the Kingdom of Hawaii.

Over the succeeding years, the two championed the Anglican (now Episcopal) Church in Hawaii and founded St. Andrew’s Cathedral, raising funds for the building. In 1867 Emma founded Saint Andrew’s Priory School for Girls. She also laid the groundwork for an Episcopal secondary school for boys originally named for Saint Alban. After the death of Kamehameha IV, it was renamed ʻIolani School in his honor.

In recognition of their work on behalf of the church, Queen Emma and King Kamehameha IV, “The Holy Sovereigns,” are honored with a feast day of November 28 on the liturgical calendar of the U.S. Episcopal Church.

And that, Dear Reader, is how Christmas came to be a recognized holiday in the Hawaiian Islands.

Kaʻahele Hawaiʻi was created in September of 1999 in response to a comment that if I was upset about the bad information being published about Hawaiʻi, I should start publishing good information. With the help of Konabob Stoffer, I created Kaʻahele Hawaiʻi, which I translate as “Cruzin’ Hawaiʻi”. At the time, blogs had not yet been invented, so I called it a “Webzine”. I hope you enjoy it! — Kumu Leilehua. Check it out at: https://www.kaahelehawaii.com/