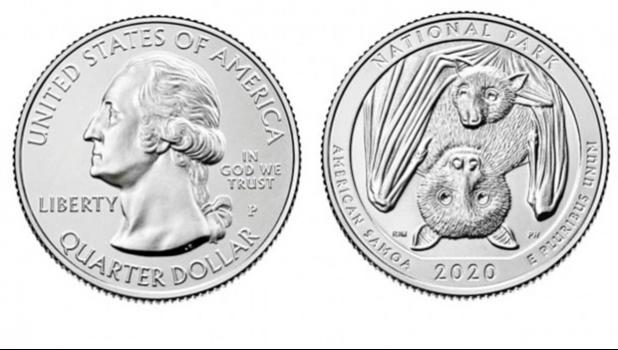 Washington, D.C. — Keep an eye out for a shiny new quarter with a raised image of fruit bats and be careful not to let the coin fly out of your wallet or pocket.

As part of the U.S. Mint's America the Beautiful Quarters Program, the new National Parks quarter dollar celebrates American Samoa and on the relief features a mother fruit bat and her pup hanging upside down.

The first special edition coin of the new year will be released on Feb. 3.

"The image evokes the remarkable care and energy that this species puts into their offspring," the U.S. Mint wrote in its description. "The design is intended to promote awareness to the species' threatened status due to habitat loss and commercial hunting. The National Park of American Samoa is the only park in the United States that is home to the Samoan fruit bat."

Since 2010, the U.S. Mint has issued 56 quarter-dollar coins that feature designs which depict national parks and other national sites as part of its America the Beautiful Quarters Program.

There are three types of fruit bats in American Samoa, but the star of the new quarter is Pteropus samoensis (pe'a vao), commonly known as the Samoan fruit bat. It is presently found only in the Samoan Archipelago and Fiji. These megabats are huge, with a wing span up to 3 feet wide. There are indications that they are monogamous, and they are renowned for their close parenting, "Even after they are capable of flight, the young continue to receive parental care, perhaps until they reach adult size or become reproductively active themselves," notes the park's website.