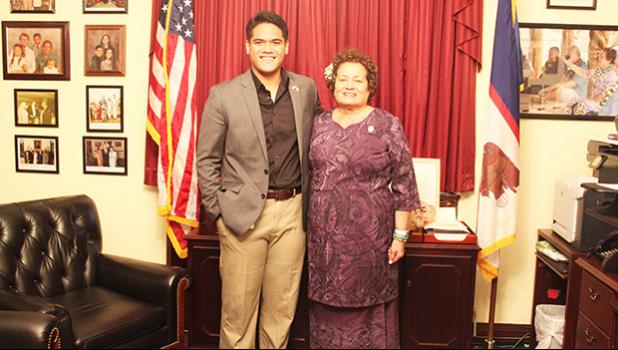 Washington, D.C. — Tuesday, December 29, 2020 — Congresswoman Uifaatali Amata is delighted to congratulate John Iosefo of American Samoa upon the announcement of the prestigious Charles B. Rangel Fellowship in International Studies from Howard University.

“Congratulations to John upon earning this superb opportunity,” said Congresswoman Amata. “We’re always so happy to see one of our own succeeding and taking on new challenges. John served in the American Samoa congressional office as an intern, and did an excellent job. Now he’s making American Samoa proud with this new educational step into diplomatic public service with the U.S. State Department. Congratulations also to his parents Tauiliili Silivelio and Juliana Ah-Ching Iosefo, and his many teachers, professors and influencers along the way.”

This highly regarded Fellowship is part of a career and academic path to becoming a Foreign Service Officer and to earning a Master’s degree in security studies. As part of the Rangel Program, John will intern with a Member of Congress on issues related to foreign affairs in summer 2021. In summer 2022, the U.S. Department of State will send him overseas to intern in a U.S. Embassy or Consulate to get hands-on experience in U.S. foreign policy and the work of the Foreign Service. Upon successful completion of the program, John will become a U.S. diplomat in summer 2023, embarking on one of the most challenging and rewarding careers of service to his country.

John is from Tafuna and Lauli’i villages of American Samoa, and graduated Tafuna High School. He is the youngest of eight children. John now attends the University of San Francisco, and is completing his final year of undergraduate studies. He also serves in student government as President of the ASUSF Senate.

The Charles B. Rangel International Affairs Program, administered by Howard University, selects outstanding Fellows yearly in a highly competitive nationwide selection process, then supports them through two years of graduate study, internships, mentoring and professional development activities. Graduates of the program now serve as diplomats around the world.

The program is named for the late Congressman Charles Rangel, who had a long and influential career in Congress that included chairmanship of the House Ways and Means Committee.