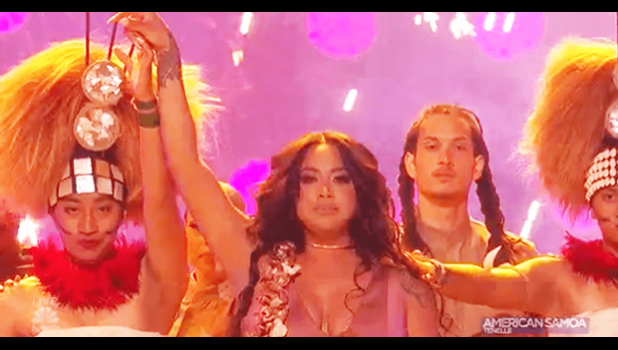 Hollywood, CALIFORNIA — After eight weeks of national upheaval, the fans can finally rest easy: the 'American Song Contest' has ended. Even though K-pop queen AleXa went on to win, American Samoa's Tenelle struck a chord with the viewers.

Ten acts remained at the start of Monday's two-hour finale event, but at the end of the night, only one survived. And the top ten weren't only having a good time on Monday. Voting stayed open until the end of the episode, making it anyone's game until the very last second. The votes of viewers were then combined with those of jurors from across the nation, which were announced soon before the final results. Even though she didn't make it to the end, Tenelle continued to wow the audience with her teary-eyed performances following semi-final 2.

Tenelle told Kelly Clarkson, one of the show's hosts, before taking the stage that her parents are her biggest supporters and that her father assists her with her music videos and is the reason she loves music. Tenelle then revealed that her finale performance would include some surprises. Hers was one of the most upbeat and cheerful songs of the competition, and many believe that songs like this are exactly what the country needs right now. The lyrics were simple but strong, and it's impossible not to smile along with Tenelle as she performs.