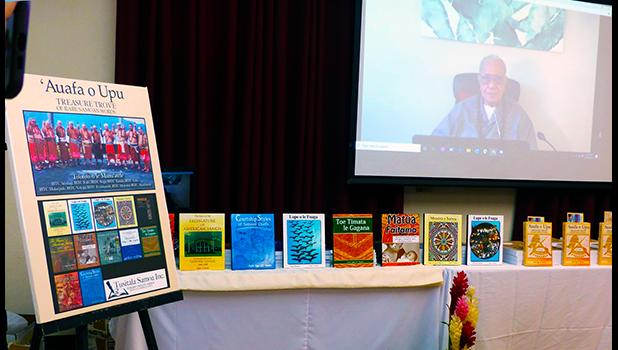 Pago Pago, AMERICAN SAMOA — Author and Samoan orator, Fofo I.F. Sunia appeared on screen via VTC on Monday this week during the launch at the Naumati Room of the Tradewinds Hotel, for his latest publication — ‘Auafa o Upu, Treasure Trove of rare Samoan Words — which contains 5,000 words that Fofo says all speakers of the Samoan language should know, cherish and use to improve and enrich their vocabulary and speech.

Fofo participated from Las Vegas, where he is stranded due to the suspension of flights between Honolulu and Pago Pago.

However, there was a problem with the VTC connection prompting his son, Associate Justice Fiti Sunia to read for the audience the rest of Fofo’s prepared speech. Invited guests to the book launch included Lt. Gov. Lemanu Palepoi Sialega Mauga — who attended on behalf of the governor; Fono leaders, educators, chiefs, family members and others.

Fofo also used the event to propose the establishment by law of a Samoan Language Commission to set standards and guidelines for the Samoan language — similar to what’s occurring in Samoa.

Sen. Tuaolo Vaivao Manaia Fruean, (right — seen here with his wife, Mrs. Fiapa’ipa’i Fruean), an old friend of Fofo, gave the keynote address, while Lemanu delivered special remarks on behalf of the governor, who wasn’t able to make it to the event, but was on the program as a speaker. Speaking on behalf of Fofo and his family was his brother Faoa Aitofele Sunia, who expressed appreciation to all those who attended.

The invited guests were given free copies of the book, which sells for $60. Other publications authored by Fofo were also for sale at the event.