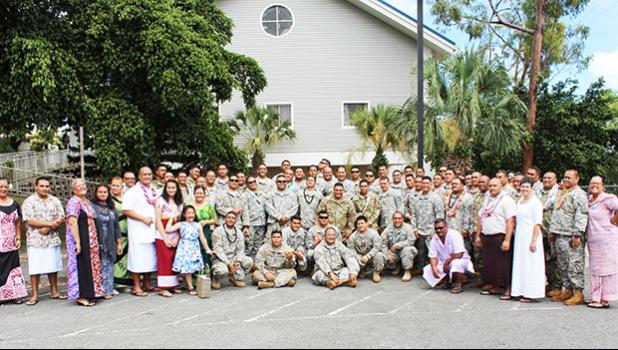 Fort Shafter, HAWAII — Sons of Samoa serving the United States of America, a service that comes with many sacrifices, is even more telling on days like Father’s Day. As thousands of fathers celebrate their special day in the comfort of their homes, there are also men or fathers who have been on missions day and night walking tirelessly for miles whether in the burning heat or the dark of night carrying 50-70 lbs. of necessities on their backs slowing down only to get a sip of water and continuing with their mission.

When time permits, they feast only on the infamous MREs or Meals Ready to Eat which tastes nothing like mother’s home cooking. Despite all their sacrifices, they long to be reunited with their families, wives, children and friends who await their safe return. These are the men or soldiers of the 100th Infantry Battalion led by their 1SG Mageo, Chadron.

A newly established Samoan Protestant Church at Aliamanu Military Reservation Chapel near Fort Shafter was blessed as they were joined by their brothers from American Samoa who are training at Schofield Barracks, Oahu, Hawai’i.

Their first Father’s Day service is one to remember as they were honored with the presence of the men of the 100th Infantry Battalion. Only a few of them were able to attend, while the majority were still on missions. These men understand the sacrifice of leaving their loved ones behind to seek a better future.

Tired from an earlier mission that ended at 3a.m., these brave soldiers did not let fatigue stop them from an opportunity to not only attend Father’s Day service but to fellowship with members of the Samoan Protestant Church AMR whose focus is ministering to Service Members and their Families as well as anyone who is searching for a home church.

MAJ Tuliloa, Aigafealofani Tuliloa was instrumental in arranging the gathering fulfilling one of the reasons why this church was established. SGT Fea was the spokesperson for the 100th Infantry Battalion sharing their gratitude for welcoming them with open arms.

The Father’s Day Service included the lighting of the candle by Faletua Mesepa Panama who is also a vet, and remembering all the fathers who are no longer with us.

A short performance from the youth and words of encouragement from Joshua’s words of wisdom, “For me and my house I will serve the Lord” emphasizing the responsibility of a father. Customarily, ulas were presented to all the fathers followed by a pot-luck prepared by the Mafutaga Tina.

The day concluded with a group photo and good-byes as we parted ways.

The Samoan Protestant AMR Church is under the leadership of Lay Pastor Mario Lefiti and his wife Taotafa.