Couple from American Samoa turned away from ASG-Hawai’i Office 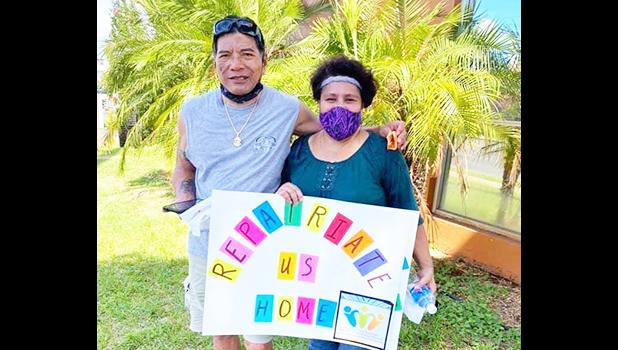 Honolulu, HAWAII — Wayne and Pua Pila tried to visit the ASG office in Honolulu on Friday “to look around”, but one of the staff members closed the office door without replying to the Pila’s request to enter, so they left.

They have been staying with their daughter at Hickam Air Force Base in Honolulu for the last 8 months, awaiting the territory to open its borders.

The Pilas flew to Seattle, Washington for medical checkups before American Samoa closed its borders in March, due to the COVID-19 pandemic.

Hisatake's heartfelt plea as penned on her sign to Governor Lolo M. Moliga and Task Force, echoes the cries of all the local residents who are stuck and stranded in America — it’s been 8 months so far — for repatriation and financial assistance. Hisatake is from Alofau and had traveled to the States for a medical check-up.

Mrs. Kueni Aumoeualogo Hisatake, a consultant to the Tagata Tutu Faatasi Alliance of American Samoa (TTFFAS) and one of the 500+ stranded residents of American Samoa who are in Honolulu, Hawaii. [photo:  TTFAAS]