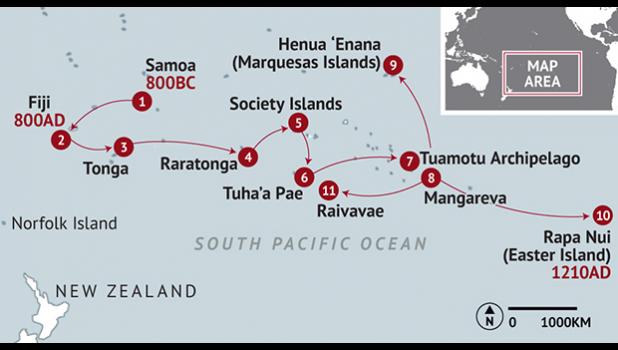 Pago Pago, AMERICAN SAMOA — A new DNA study appears to confirm the theory that Samoa is the cradle of Polynesia. And during the 1980s a series of archeologists and anthropologists trekked through Pago Pago on their way to Manu’a in a search for clues to unravel the origins of Polynesia.

While overnighting on Tutuila, many of them made their way to the dinner table of renowned American Samoan screenwriter and playwright, John Kneubuhl — who was recognized as a noted amateur anthropologist and Polynesian historian.

Late into the night the visitors — and locals who were lucky enough to show up at the impromptu gatherings — let their minds range from the Thor Heyerdahl theory that Polynesians came from South America to the newer (at the time), more daring theory that the Lapita people from southeast Asia paused in their journey at Manu’a, with some settling and evolving into the ancestors of the first Polynesians — who then fanned out over the Pacific to populate islands that are now the homelands of Polynesia.

On Wednesday a genetic study was published that has deciphered the timed sequence of this migration, with Samoa as the starting point while Rapa Nui (or Easter Island) among the last to be reached.

“Many of the distances were immense,” said Stanford University computational geneticist Alexander Ioannidis, lead author of the research published in Nature on Wednesday.

Reuters news service in a distillation of the Nature research article reports that the first voyages were found to have been from Samoa to Fiji and Tonga and then to Rarotonga in the Cook Islands in the 9th century AD. In the 11th century, the islands of Totaiete ma (Society Islands) were next, followed in the 12th century by Tuha’a Pae (Austral Islands) and the Tuamotu Archipelago.

“Each living individual retains a genetic record of all the ancestors from whom they inherited their DNA, so by analyzing together hundreds of individuals we can create a genomic network where connections, splitting patterns and dates can be inferred,” said geneticist and study co-author Andres Moreno-Estrada of Mexico’s CINVESTAV network of research centers.

“It is one of the most impressive and fascinating chapters of human expansion and long-distance exploration,” Moreno-Estrada said.

The study reveals what those who were at Kneubuhl’s dinner table in the 80s demonstrated — there has been an ongoing debate based on archaeological remains as to when the Polynesian islands were settled.

“Unraveling these histories is not only a fascinating challenge, but also an incredible demonstration that modern populations are still connected physically to their ancestors’ stories,” Ioannidis said.

Despite the dramatic movement of peoples across thousands of miles of ocean, according to the article it was merely an intermediate stop in a larger Pacific regional human expansion beginning in Taiwan around 4000 to 5000 years ago.

It is believed Samoa was settled by around 800 BC.

AN INTERESTING SIDE NOTE

There was early contact by Polynesians with native people in South America, as detailed in the genetic study published by these same researchers last year. But the flow was not as Hyerdahl surmised — from South American to the Tuamotos —but instead the reverse.

“This suggests that when the maritime culture was embarking on its longest voyages of discovery to the Tuamotos, they also made contact with the Americas,” Ioannidis said.