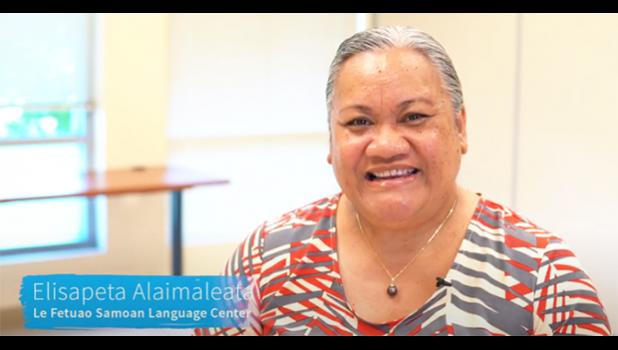 Just one of her many endeavours this past year was assisting the general population and the stranded residents of American Samoa during their push to repatriate to the territory.  This was a huge undertaking.

People were stranded in Hawaii and in different states in the mainland. Many families needed food, shelter, medical, financial assistance, transportation etc. due to border closure. Le Fetuao and its partners’ efforts to connect stranded families, developing a network of like-minded leaders to assist stranded residents supported the community in general.

The outreach not only provided empowerment and education in the community but it helped to combat the spread of the virus by taking care of stranded residents in need. Repatriation of stranded residents continues right now in the State of Hawaii through a quarantine process before residents departs to the U.S. territory. While in quarantine, Le Fetuao SLC works closely with its partners by providing care packages for residents. Two flights successfully transferred covid-free residents from Hawaii back to the U.S. territory. Repatriated residents have reunited with their families since separation over a year due to border closure. Her beliefs of caring for ALL in times of a pandemic are crucial in combating the spread of the virus in the community. We want to build a sustainable, powerful and a resilient Hawaii by serving the community safely with ALOHA.

Aiding her was her strong network, partnerships and connections with many organizations

Elisapeta is from American Samoa and Samoa has along with her husband raised 5 children while he served in the U.S. Military for 18 years. During his numerous world-wide assignments, Elisapeta held down the fort at home in the State of Hawaii.

Outside of work and her family, she enjoys many hobbies, however, one in particular combines her personal passions and professional interests – she loves to talk story with elderly community members, her own way of connecting herself with her ancestors. In fact, her elder discussions are just another way she constantly demonstrates her belief in, and commitment to lifelong learning. In 1988, she graduated from Faga‘itua High School in American Samoa as the Salutatorian of her graduating class.

Having garnered scholarships and a congressional award for her academic achievements, she started her journey through higher education at American Samoa Community College where she earned an Associate of Arts degree after two years. As a product of American Samoa Department of Education, she taught in the public schools for more than 10 years before moving to Hawai’i. She obtained her Bachelor’s and Master’s degrees in Education from the University of Hawaii – Manoa. With her beliefs in having a good future with a college education, her children are now attending the same university she attended, UH-Manoa. Currently, she is continuing her studies by pursuing her doctoral degree in Education at the University of Phoenix.

Elisapeta’s professional history shows her dedication to the use, preservation and propagation of Samoan language and culture, and her service to native children. She has extensive experience as a classroom teacher of all stages from early education through High School. 12 years of her work at the University of Hawaii-Manoa were with some of the most under-served student populations in areas like Kalihi, Waipahu, and Waianae on Oahu. She traveled to Phonpei, Micronesia as a teacher trainer and a consultant.

She is the co-founder of PreK-Boost Camp, a program to help prepare 4 year olds for preschool and Kindergarten level. As a founding member of Faga’itua High School Alumni Association in Hawai’i, she enjoys developing programs to help the community thrive via their heritage. In 2008, she founded Le Fetuao Samoan Language Center in Honolulu, Hawaii. This community based, non-profit organization provides young Samoan children outside of Samoa like the State of Hawai’i and in the U.S. mainland with the opportunity to learn their heritage, culture and language through the efforts of community members, parents and volunteers.

She served as the Program Manager for Le Fetuao Samoan Language Center, wrote and secured over a half a million in federal funds in 2013-2016 to help with their mission to preserve and maintain Samoan language in Hawaii. Her efforts with her colleagues and staff members initiated in 2016 the First International Samoan Language Symposium in the U.S.A. now sustained in the Samoan U.S. community. She was also instrumental in assisting the Chuuk community in Hawaii by offering her free service of mentorship, teacher training, and sharing her expertise in developing Le Fetuao community based school for children and parents. Her efforts are now expanding to the U.S. mainland and in the Micronesian community in the State of Hawaii.

In addition to her many education endeavors, Elisapeta has also worked as a Samoan language educator and consultant in Hawaii, U.S. mainland, Am. Samoa, Samoa and New Zealand. During the pandemic in 2020 to present time, Le Fetuao continues to be an active partner to the City and County of Honolulu by way of assisting in outreach food distributions, developing partnerships in the Pacific Island (PI) communities; assist with information dissemination and education outreach, offering her expertise to help leaders in the NHPI COVID task force on how to reach NHPI communities who were greatly affected by the virus.