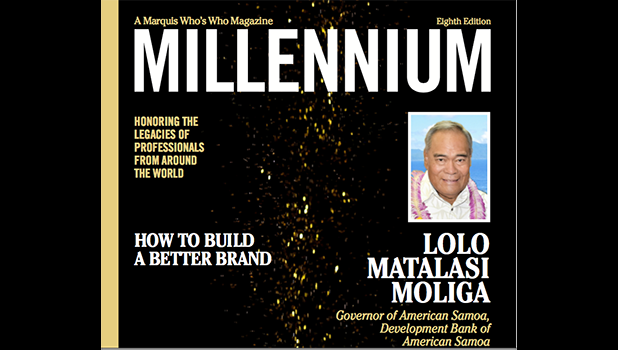 Pago Pago, AMERICAN SAMOA — American Samoa’s former Gov. Lolo Matalasi Moliga is featured in the 8th Edition of the “Millennium, a Marquis Who’s Who Magazine”, honoring the legacies of professionals around the world. The governor’s story is featured in the magazine’s Government and Military section.

The publication had informed Lolo through Sept. 27th emails of the front-cover feature and inside story on page 156. Last Friday, the information was shared with the local media by Lolo’s former staff members.

The feature provided much of the known public information about Lolo, who is a native of Ta’u, Manu’a, and started his career as a teacher, and also served as director in ASG, including in the Budget Office and Office of procurement. He had also served as president of the Development Bank of American Samoa and was also a business owner years ago.

To prepare for his career, the Magazine reports that Lolo pursued his formal education at Chadron State University earning a Bachelor of Education in 1971. He also earned a Master’s degree in Human Resources and Public Administration from San Diego State University.

The feature also noted that Lolo has been a pastor for the Christian Church of American Samoa.

When asked what advice he would provide to aspiring professionals in the field, “Lolo emphasizes that one should put civilian needs before their own needs, thus establishing a basis for leading others. He lives by the notion of “lead by example,” according to the story.