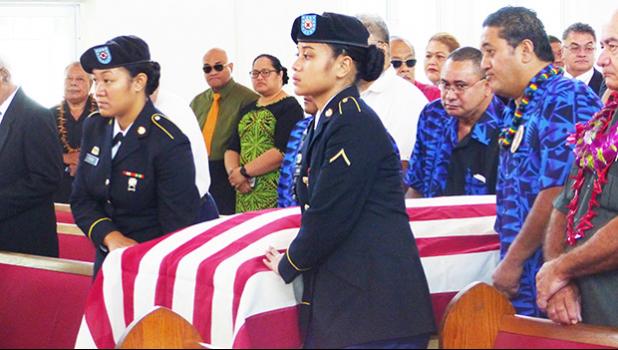 Pago Pago, AMERICAN SAMOA — The American flag-draped casket of the late former Rep. Matagi Malotumau David Palepoi Sialega Mauga was escorted into the CCCAS Aua Church for the final funeral service on Monday this week, where his older brother, Lt. Gov. Lemanu Palepoi Sialega Mauga, family members, friends and others were in attendance.

Lemanu spoke for the family during the funeral service. Matagi served as a Deacon for his church for many years.

Presented at the funeral service was a House Concurrent Resolution in which the Fono conveyed its “deepest and most sincere condolence” to the widow, Mrs. Sylvia Imeleta Sonoma Liufau Mauga, as well as the Mauga and Sialega families on the “untimely passing” of the former faipule.

The resolution also pays tribute to his service to his families, village, district and American Samoa. He passed away Aug. 19th, almost a week before his 52nd birthday.

A 1987-graduate of Samoana High School, Matagi went on to the American Samoa Community College in 1982 and later moved to Hawaii where he graduated in 2010 with a BA degree in Administration of Justice from the University of Hawaii, at Hilo.

He was a member of the US Army Reserve serving as a Specialist from 1993 to 2001 and received an honorable discharge from the military but remained an active local member with veterans’ associations.  “He is described by many circles as a humble and very approachable man,” the resolution states. “He would bring laughter to a room and brought peaceful resolution to tense situations.”

On Mar. 31, 2015, he ran in a special election to fill the vacant seat in the House for Sua District 2 and won. He served on several House committees including the powerful House Budget and Appropriations Committee. He chaired the Parks and Recreation Committee as well as the Legal Affairs Committee. He was reelected for the 35th Legislature but was unsuccessful last year in his bid for re-election to the current 36th Legislature.

He was a teacher at Manumalo Academy for 10 years before moving to the Attorney General’s Office where he was a legal assistant and investigator. A short time after joining the AG’s Office, he became director of the Consumer Affairs Bureau.

“While Dave’s passing is difficult on the many who knew him, everyone is comforted in knowing that he is without the trials of this world,” according to the resolution, which also notes that he is survived by his wife, a son, his mother — who spoke during the funeral service — and many nephews and nieces who he and Sylvia raised.

Samoa News extends our deepest condolences to the grieving families.