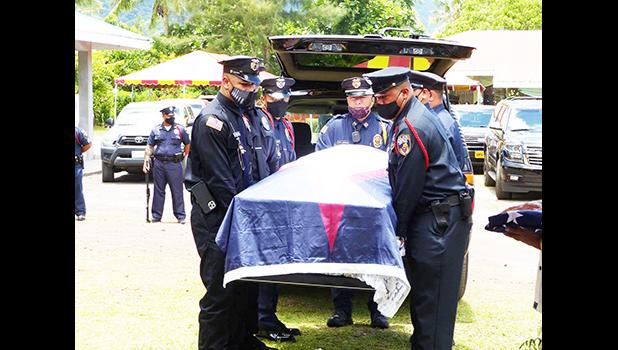 Pago Pago, AMERICAN SAMOA — The American Samoa flag draped casket of the late former Sen. Tulifua Tini Lam Yuen was carried by a police honor guard during the burial service at his home in Happy Valley area of Tafuna on Monday this week. Tulifua passed away peacefully on Jan. 4, 2021 at the age of 69 in California and his remains were returned back to the territory on a recent cargo flight.

According to the Fono approved resolution sponsored by Senate President Tuaolo Manaia Fruean, Tulifua — the long time business man was selected in the year 2000 by Tualatai county as its senator, and served for three-consecutive, four-year terms. And during those terms, he served as Senate President Pro Tempore, chair of the Senate Ways and Means Committee, vice chair of two standing committees and was an active member for other committees.

Upon retiring from the Senate, Tulifua traveled often to the US for medical check ups and he enjoyed visiting his family and friends. He loved to sing Samoan songs and harmonizing with others.

“He was warm and welcoming to all who visited their family home, having hosted numerous church conference attendees over the years,” the resolution states and noted that Tulifua fought a difficult battle with cancer. “He reminded his children to put God first, help others, and love and serve their family and to set the examples for the future generation.”

Although he grew up in Samoa, where his father worked as a carpenter, the family moved back to American Samoa and at the age of 19, Tulifua was hired as an Algebra teacher at Samoa High Schools where alumnus remember him as “the big, smart teacher who giggled when he laughed,” the resolution states.

Hearing his “unique laugh” made the students around him laugh along with him and he taught Algebra with a passion and with his jokes in class — made “Algebra fun to learn”.

He earned a Bachelor’s degree in Mathematics from Brigham Young University and helped establish the family’s furniture business.

In October 1992, he was bestowed the high chief title of Tulifua and he “worked to mend broken family bonds, strengthened existing family ties, and encouraged the young men of the family to serve and strengthen their extended family bond,” the resolution states.

It also says that Tulifua’s final words to his family were meant for everyone — “Whatever you do, do well. For when you go to the grave, there will be no work or

planning or knowledge or wisdom.”

Samoa News and the Annesley family extend condolences to the grieving family.  Tulifua was a good friend.