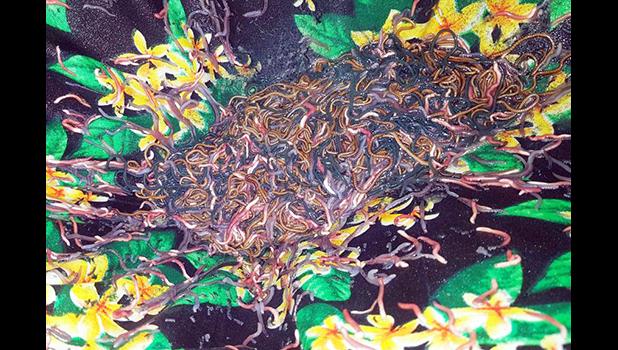 Source: ABC.net Pacific Beat
It's literally like taking a bite of the big blue sea because the sea has so many different flavours — it's salty and tastes like abalone, oysters and mussels.

THE SAMOAN ISLANDS — To the untrained eye they look like worms, but Samoans know these marine creatures as palolo, and they are revered as the caviar of the South Pacific.

They are found in shallow coral reefs, are often electric blue in colour, and Samoans only have a small window to ka palolo (catch palolo), because they only appear for a few days every year.

The hunting also has to be done in darkness, usually in the early hours of the morning, because the palolo melt in the sunlight.

The palolo is the edible portion of a polychaete worm, and the mating season of the palolo follows the lunar cycle — typically on the seventh night after the October full moon.

"It's got all the elements of a magical story — they're like little vampires mixed with a werewolf," said Elizabeth Ah Hi from Samoa's Palolo Festival.

Under the waning moon, the palolo will detach its lower half, where its reproductive organs are, and the "tail" will float to the surface of the water and release eggs and sperm in a mass synchronised spawning event.

"Coral, fish, shellfish and other sea organisms will also spawn at this time and the larvae of some animals will feed on the eggs and larvae of other animals and it's a means of survival," said Magele Etuati Ropeti from Samoa's Ministry of Agriculture and Fisheries (MAF).

The head of the palolo then sinks back under the ocean's surface to start the process again, unaware of the human feasting frenzy taking place on the surface.

Palolo are steeped in both mystery and Samoan tradition, and while the idea of eating sea worms might not sound appealing to some, Ms Ah Hi says they are "delicious".

Ms Ah Hi said because Samoans have been catching and eating palolo for generations, it also tastes like culture and history.

"I once interviewed the owner of Vaimoana Seaside Lodge, and he said something that has really stuck in my mind. He said, 'Palolo tastes like tradition.'

"I think that encapsulates it so well in the context of Samoan culture and our traditions and our history."

This year's palolo season in Samoa was from October 8 to October 10, and while palolo can be found all over Samoa, Magele said it was a matter of accessibility.

Hunting for palolo has to be done in darkness. [Supplied: Samoan Ministry of Agriculture and Fisheries]