The Long Journey Home complete for the first 159 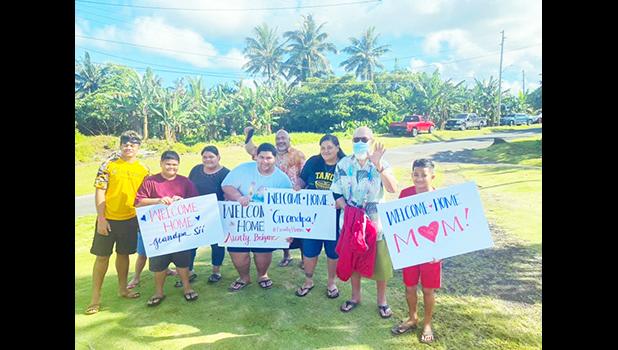 Pago Pago, AMERICAN SAMOA — It was a beautiful sunny President's Day holiday, Monday, Feb 15, 2021 when the 159 repatriated citizens and residents of American Samoa that were quarantined at Tradewinds Hotel for 14 days, were finally allowed to return to their families after 5 Negative COVID-19 tests and close to 30 days of quarantine, combining Honolulu and American Samoa stays.

Governor Lemanu Peleti Palepoi Sialega Mauga and some of his cabinet members, including Head of Samoan Affairs, Mauga Tasi Asuega, gathered with the 159 repatriated citizens and residents, for a Thanksgiving Prayer Service, by the hotel poolside, under the leadership of the Faifeau Toeaina Rev. Kereti Faiai.

Lt. Gov. Talauega Eleasalo Va’alele Ale was unable to attend due to other government obligations.

The 159 repatriated citizens and residents, led by Fofo Sunia and newly appointed Police Commissioner, Lefiti Atiulagi Pese, held a cultural presentation of fine mats, food, money and t-shirts with the Tagata Tutu Faatasi Alliance (TTFAAS) logo printed on them, to the Governor, Mauga, DOH Director Motusa Tuileama Nua  and his staff, and other ASG leaders, to show their "Agaga Faafetai" to all who helped make this first repatriation trip possible.

The Tradewinds lobby was the sight of tears and laughter, of happy reunions between families and friends but also mixed with sadness for the 159 repatriated who have become a family during this long journey home, as they bid each other farewell.

The next repatriation flight is tentatively scheduled for March 10, 2021.

One of the 159 repatriated citizens and residents of American Samoa, Shalom Solomon, greeted outside of Tradewinds Hotel by his family. Monday, Feb 15, 2021 was the 14th and last day of the quarantine in American Samoa. [courtesy photo]

Mrs. Maraia Malae's grandchildren were excited to finally see their grandmother who was stranded in Washington State for over a year. They were on hand with their welcoming sign, to greet her at the Tradewinds lobby. [courtesy photo]

First Lady Ella Mauga with family members. She was one of the 159 repatriated residents. [courtesy photo]