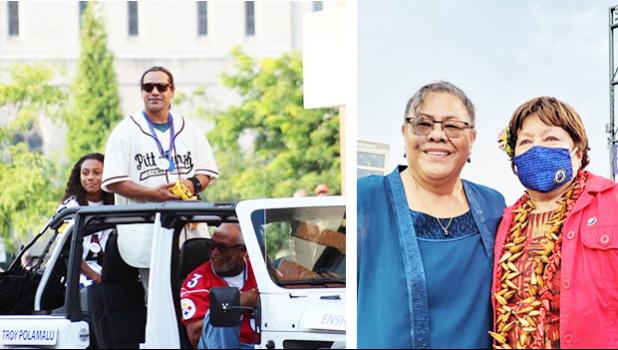 Canton, OHIO —  “I come from a culture where discipline, humility and respect are not only the foundation of our survival, but the key to our existence,” Son of America Samoa, Troy Polamalu said.

“I am a first-generation American Samoan, and I’m proudly representing my family’s lineage to America and to the NFL,” Polamalu said at his investiture into the NFL Hall of Fame yesterday.

Cong. Uifa’atali Amata sent these photo from the event where she was a guest of the Polumalu family. “My sincere thanks to Troy Aumua Polamalu's mom, his brothers, sisters and the rest of his immediate family for inviting me to sit with them at his enshrinement ceremony Saturday in Canton OH. Sorry I didn't take the greatest pics but it was the thrill of my life and I will never forget it! Fa'afetai Tele i lou agalelei ma le agaalofa! Faamanuia oe ma le aiga e le Atua.

Polamalu had a 12-season career filled with spectacular performances, leadership and, well, winning with the Steelers. The 16th overall draft pick in 2003 from Southern California, he played in three Super Bowls, winning two, and made the NFL’s 2000s Team of the Decade.

“I love football. It was my entire life as long as I can remember,” said Polamalu, who missed festivities earlier this week after testing positive for COVID-19; he was medically cleared to attend Saturday. The crowd of 18,383 cheered long and loud for him, delaying his speech.

He then talked about the “willingness to push beyond what the brain says is possible for the body. Football challenged me mentally, physically and spiritually. I had to succeed to quench this desire.”