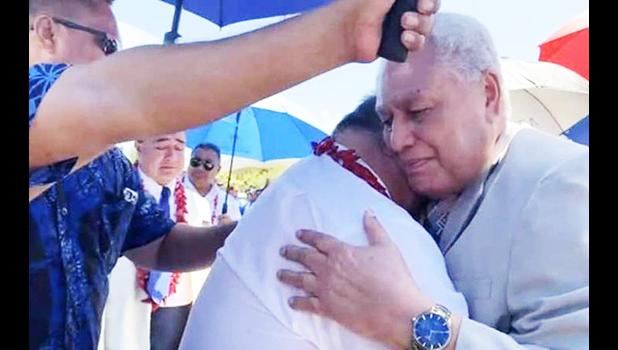 Apia, SAMOA — As Samoa police were poised to remove opposition HRPP members from Parliament grounds by force the Head of State, Tuimalealiifano Vaaletoa Sualauvi II, arrived and was then seen greeting the tearful leader of the HRPP Tuilaepa Sailele Malielegaoi.

Despite the police instructing the HRPP to clear out earlier in the morning, the opposition members refused and requested the Speaker come out to address them in the FaaSamoa tradition. They say this is the way they dealt with protest marches when they were in power.

Tuimalealiifano's arrival came after 18 elected, but unsworn MPs, including Tuilaepa, were protesting their inability to enter Parliament.

Police had just issued an order for them to evacuate the premises after an earlier verbal altercation.

The Samoa Observer reports Tuimalealiifano was guarded by police and was seen heading to the back of Parliament chamber while the session was still continuing.

After the arrival of the Head of State, the HRPP members eventually left on their own accord.

On Tuesday (Samoa Time), there were heated exchanges outside parliament as police once again turned back the former prime minister and his HRPP colleagues.

The Speaker, Papali'i Li'o Masipa'u, banned HRPP members because, among other reasons, he said they refuse to recognize him as Speaker.

Samoa's prime minister says the HRPP only has itself to blame.

Fiame Naomi Mata'afa's statement came at the opening of the first sitting of the country's 17th parliament, five months after the election in April.

In her opening statement the prime minister seemed to distance herself from the Speaker's decision, except to say she was appalled at the tone of correspondence from the HRPP leader to the Speaker.

One of the TV monitors mounted inside the Senate chamber where senators along with Senate staff, watched from American Samoa the latest development yesterday morning in Apia, through one of the live-feeds from Samoa. This part of the feed, shows former Samoa prime minister, and leader of the opposition Human Rights Protection Party, Tuilaepa Sailele Malielegaoi (speaking through a mega-phone) surrounded by members of his party as they are banned — for the second day — from entering the Parliament compound at Mulinu’u. [photo: FS]

Tuilaepa spoke directly to a senior police official outside the compound, saying that the HRPP wanted to hear an official response directly from the Speaker of Parliament on the status of HRPP members who won their seats during the April general election. At least twice during his Samoan remarks, Tuilaepa said “we are not children”.

American Samoa’s senators also watched the live-feed on Tuesday (in chamber) when the Samoa Parliament officially opened while Tuilaepa, HRPP members and supporters were banned from entering the compound.

Many in the territory have been watching the developments in Samoa via live-feeds on Facebook and other social media platforms.

Samoa's government has tabled its first ever national budget in Parliament.

Minister of Finance, Mulipola Anarosa Ale Molio'o said it's a budget aimed at "recovery, building resilience and shared prosperity for all the people of Samoa."

Total expenditure for the financial year 2021/22 is estimated at $US320.5 million dollars.

Revenue is expected to bring in $US285 million with the deficit met by a low interest loan.

Mulipola Anarosa said it's unfortunate the new government has inherited a debt of more than a billion tala, $US325 million, but it's committed to start reforms.

The pension for the elderly will be increased by 25 percent in November and a disability benefit is planned.

The budget also includes one-off assistance for businesses affected by the COVID-19 border lockdown, including hoteliers.

Non-government-organizations will get some funding, especially women’s groups to stop violence against women and children.

The Human Rights Protection Party leader has confirmed they are heading to the court to challenge the Speaker’s decision to refuse swearing-in the party’s 18 Members-elect.

HRPP leader Tuilaepa made the announcement in response to queries from the media during a press conference at Petesa on Tuesday evening.

The Speaker of the House, Papali'i informed the former ruling party of his decision to disallow their unsworn Members from the parliament session this week in a letter delivered on Monday on the eve of the new parliamentary term.

However, the former Prime Minister claims that the decision of the Speaker was a “weak excuse” and they are going to challenge it.

The decision by the party to return to the court comes on the back of a previous declaration that "they would not be heading to court" as Tuilaepa claimed that his party had lost faith in the courts and their decisions.

“The Parliament lacks independence and is working hand in hand with the Government to frustrate the efforts of the HRPP to be sworn in, especially after the Head of State has issued their writs of appointment," he said.

“It’s the darkest day in the history of democracy in this country. The events of 14 September according to Tuilaepa had tarnished the reputation of Samoa.