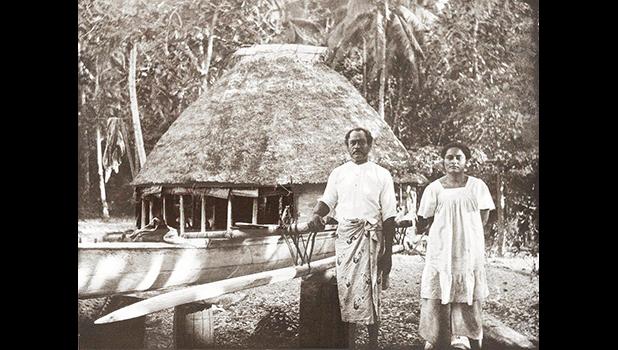 Source: Jordan Todorov in Atlas Obscura
The hoax book that became an anarchist and hippie bible

Berlin, GERMANY — In 1920 a German man named Erich Scheurmann published a strange little book titled The Papalagi. The 117-page travelogue, written as a series of 11 speeches supposedly by a Samoan chief named Tuiavii, described the European way of life in a simple, childlike manner. Tuiavii called shoes a “kind of canoe,” and had names for everything from clothes (“skins”) and houses (“stone boxes”) to newspapers (“machines for thoughts”), cities (“stone islands”), hot water (“sun water”), and doorbells (a “nipple, which has to be pushed until it screams”).

The Papalagi questioned the Western concepts of time and labor, and “the serious sickness of thinking” that “makes people old and ugly in little time.” It aimed its critique at a society whose obsession with money had created social inequalities, abysmal working conditions, pollution, and consumerism.

According to the book’s preface, Tuiavii wrote his speeches after he visited Europe as a member of a performance group. The book was a warning to his fellow Samoans that the papalagi wanted to drag them “into his darkness.”

Though Scheurmann’s name figured prominently in The Papalagi, he claimed to be only a translator of Tuiavii’s speeches. He did admit, however, that he had published them without the chief’s approval, hoping they would help Europeans “find out how a man who is still closely bound to nature sees us and our culture.”

The idea of a noble, wise indigenous person commenting on Western civilization was a trope of the time—one that today is recognized as simplistic, insulting, or racist. And there was something about where Tuiavii was said to come from. As Gunter Senft, a linguist at the Max Planck Institute, writes, the idea of natives “imagined to be unspoiled by all negative aspects of European civilization—by its rules, its regulations, its powers, its repressions, and last but not least by its moral standards—seems to be most popular when it deals with peoples from the South Seas.”

In the following years, the book would take on a life of its own, translated and illustrated, a favorite of the counterculture and anarchists alike. The true authorship of the book—which should be clear by now—turns out to have been a manifestation of the very Western, colonialist culture the book was intended to criticize.

There was only one, rather obvious problem: The Papalagi was a hoax.

Jordan Todorov is a documentary filmmaker and a journalist based in Berlin. www.gigantberlin.com. Atlas Obscura is an online magazine and travel company founded in 2009 by author Joshua Foer and documentary filmmaker/author Dylan Thuras. It catalogs unusual and obscure travel destinations via user-generated content.[ The editorial articles comprise a mixture of feature and news articles on topics including history, science and food, in addition to travel and exploration, as well as hosting a collaborative, definitive guide to the world's most obscure places.