Reminiscing with friends as we remeber events from the past 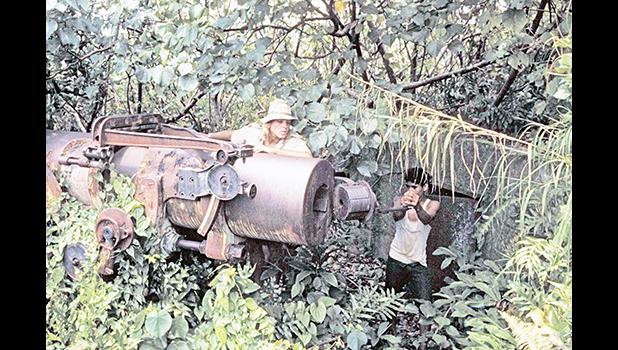 Pago Pago, AMERICAN SAMOA — Mark Wade (left) is pictured in the 1974 photo with his friend Nofo at one of the Navy gun embankments left on Tutulia after WWII.

“I came to American Samoa in 1969, I was 19 years of age. I flew in on Pan American World airlines. Lived off and on from 1969 to 1980. In 1974, I was living above the market place in Pago Pago harbor on the haunted hill with Thor, Nofo and Bill LeGalley,” Mark emailed recently to Samoa News.

That year, two of his friends came to American Samoa to visit, Chris Bay from San Francisco and Gui Faulhaber from Brazil. “We heard about canons in the jungles. Nofo would show us the way. The climb up was all jungle and muddy. It took a long climb and many hours to reach the canon.

“When we first came upon the canon and bunker, it was like finding a lost city. Chris took the photo of me and Nofo with a Nikonos 3 camera amphibious, 35 mm lens.”

He said at that time, on the path back, you could see where marines wrote their names and dates in wet cement.

“We could see the cloud capped peak of Matafao in the distance.

“I will never forget my incredible times in American Samoa and the great hospitality of the Samoan people.”

Thanks Mark for the great photo and for staying in touch.

Blunts Point is a projection on the west side of the mouth of Pago Pago Harbor, on the south side of the island of Tutuila, southeast of the village of Utulei. Two six-inch naval guns are mounted at a point about 200 feet (61 m) above sea level, at this point, which has a commanding view of the harbor entrance. The guns are mounted in circular concrete structures with a parapet about 4 feet (1.2 m) high around the outside. A short way below the emplacement is a magazine which is built into the hillside.[3] The battery has been restored and is in good condition. It is accessible to the public via a moderately difficult hiking trail.

The tensions of World War II prompted the United States government to begin fortifying American Samoa in 1940. United States Marines installed the two guns at Blunts Point, and another two on the east side of the harbor at Breakers Point. Following the Japanese attack on Pearl Harbor in December 1941 and the capture of Guam shortly thereafter, American Samoa became of critical importance as the only major American base in the western Pacific, and it was further fortified in anticipation of attack. Although no attack ever came, American Samoa was a critical supply and training point for American military actions in the Pacific. (Source: Wikipedia)