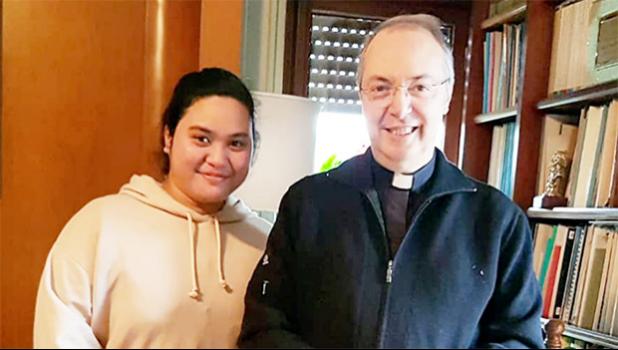 Tessarina Ve'e, who hails from the village of Vaimoso, moved to Rome in 2015 to pursue career opportunities.

She released her album on Wednesday which according to her was inspired by one of the highest liturgical musicians in Rome.

"I was inspired by the songs of the highest liturgical musicians here in Rome named Monsignor Marco Frisina,” she said. “I loved his songs, especially because of the way he delivers it in a calm sound and his voice too, I just loved it.”

Marco Frisina is an Italian Catholic priest and composer and is the director of the Pastoral Worship Centre at the Vatican City.

Ms Ve'e told this newspaper that she met last Monday and got her big break to produce her own songs.

"Then last Monday on the 25th January, I had an appointment with him and I presented my songs, and he confirmed it saying that I can push through with my songs. I composed five songs.”

Her songs are mainly for masses or the Catholic church services and represent emotions, good and bad times and messages from one’s inner self.

"Music is a way to express yourself, keep you company while you're alone, and always give you something to do.

Ms Ve'e’s father and brother are musicians in Samoa and she believes that it is a talent that God has gifted her family with.

The songs that Ms Ve'e composed include Kyrie, Eleison (Lord Have Mercy), Gloria, Hallelujah (Alleluia), Santo (Holy Holy Holy) and Ave Maria which is in Latin.

Having been away from her family for six years, Ms Ve’e said music has kept her closer to them, and she is hoping that she will be able to live her family's legacy.