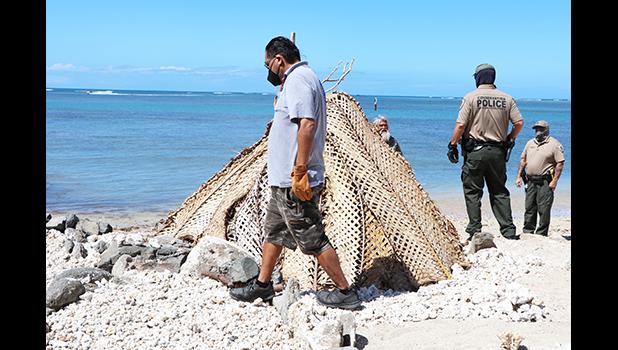 Honolulu, HAWAII — Citing lineage to various Polynesian monarchies did not keep 56-year-old Saute Sapolu of East O‘ahu from escaping a citation from the State of Hawaii’s Department of Land and Natural Resources (DLNR) Division of Conservation and Resources Enforcement yesterday morning

Sapolu (shown peeking around the side of his fale) and his sister were sitting on a narrow strip of sand alongside the parking lot at the Maunalua Bay Launch Ramp when officers showed up, along with representatives from the DLNR Division of Boating and Ocean Recreation (DOBOR).

DOBOR staff posted Sapolu’s makeshift campsite last week, as he did not have permission, under Hawai‘i Administrative Rules (HAR), to set it up on public property. It included a thatched fale, a small fishpond, plantings, and offerings and had become a bit of a tourist attraction.

Prior to DOCARE and DOBOR dismantling the camp, several tour groups passed by and either waved at him or honked their horns.

Prior to receiving a citation for two violations, Sapolu yelled at and argued with DOCARE officers claiming, because of his royal heritage, he was not subject to the laws or rules of the State.

After Sapolu received the citation, a team from DOBOR took his fale down and loaded it and other materials into a truck. By law, the division will store everything for 30-days to give Sapolu time to reclaim everything.

He was cited for having an illegal structure and storing personal belongings on State land. He is scheduled to appear July 7, in Honolulu District Court.